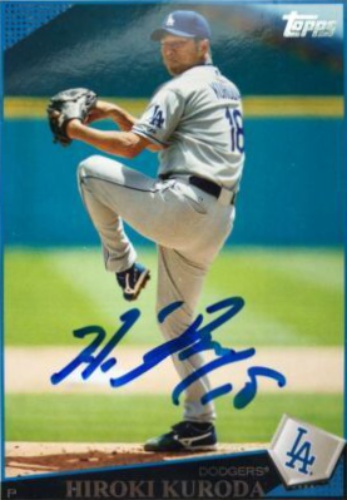 Hiroki Kuroda (黒田 博樹, Kuroda Hiroki, born February 10, 1975) is a Japanese former professional baseball pitcher. He pitched in Nippon Professional Baseball (NPB) for Hiroshima Toyo Carp from 1997 to 2007 before playing in Major League Baseball (MLB) for the Los Angeles Dodgers from 2008 to 2011 and New York Yankees from 2012 to 2014. After the 2014 season, he chose to return to the Carp to finish out his career. More about Hiroki Kuroda

Current items with a signature of Hiroki Kuroda

These are the most current items with a signature of Hiroki Kuroda that were listed on eBay and on other online stores - click here for more items.

Traded items with a signature of Hiroki Kuroda

If you're interested in Hiroki Kuroda Rookie cards you might want to take a look at our sister site that specializes in Baseball Rookie Cards only.

The most expensive item with a signature of Hiroki Kuroda (Yankees, Dodgers, Hiroki Kuroda, signed SSK Glove. Personal Model. PSA/DNA) was sold in February 2016 for $495.00 while the cheapest item (HIROKI KURODA IN PERSON - TTM AUTO / SIGNED CARD COA) found a new owner for $0.45 in October 2011. The month with the most items sold (26) was March 2008 with an average selling price of $32.49 for an autographed item of Hiroki Kuroda. Sold items reached their highest average selling price in October 2015 with $199.00 and the month that saw the lowest prices with $1.36 was February 2011. In average, an autographed item from Hiroki Kuroda is worth $28.00.

Most recently, these items with a signature of Hiroki Kuroda were sold on eBay - click here for more items.

Hiroki Kuroda says his years in the majors were “tougher than they were enjoyabl (03/08/15): This describes any given seven-year stretch in most of our lives, though, right?

Ex-Yankee Hiroki Kuroda didn't enjoy pitching in the majors, per report (02/19/15): Congratulations! Your weather is set to . You can change the location at any time. Don't have an account?

Hiroki Kuroda’s brutal one-word summary of time in majors (02/19/15): No wonder Hiroki Kuroda bolted from The Bronx. The Japanese right-hander offered little diplomacy this week in summing up his arduous experiences pitching in the major leagues. “To sum it up...

Ex-Yankee Hiroki Kuroda didn't enjoy pitching in the majors, per report (02/2015): Congratulations! Your weather is set to . You can change the location at any time. Don't have an account?

MLB hot stove: Padres tried to sign Hiroki Kuroda before he returned to Japan (01/2015): If the Padres could have signed Kuroda, it would have been another big move in an offseason where they have already acquired Matt Kemp, Justin Upton and Wil Myers.

Saying so long to Hiroki Kuroda, one of MLB's best Japanese pitchers (12/2014): As he retires from MLB to head back to his native Japan, we take a look back at the quietly excellent career of Dodgers and Yankees pitcher Hiroki Kuroda.

MLB hot stove: Yankees' Hiroki Kuroda still undecided on future (11/2014): Congratulations! Your weather is set to . You can change the location at any time. Don't have an account?

Will Yankees' Hiroki Kuroda pitch in 2015? (09/2014): Congratulations! Your weather is set to . You can change the location at any time. Don't have an account?

Why Hiroki Kuroda is MLB’s most successful Japanese pitcher (08/2014): Let’s break away from honoring Joe Torre and Derek Jeter to, at the least, acknowledge Hiroki Kuroda, one of the best free-agent signings in Yankees history and arguably the Japanese...

Hiroki Kuroda fights age to be the Yankees rotation's last man standing (07/2014): Hiroki Kuroda has risen amid a swath of injuries that has wiped out the other four members of the team's starting staff.

Yankees’ Hiroki Kuroda sharp in no-decision (06/2014): Hiroki Kuroda hasn’t won in five starts, but Brian McCann loved what he saw in the Yankees’ 5-3 win over the Orioles on Friday. “What’s going to get lost is...

Yankees' Hiroki Kuroda will get it together, Joe Girardi says (04/2014): Kuroda says he's been having trouble with breaking pitches

Hiroki Kuroda free agency: Yankees growing confident SP will return (11/2013): Kuroda would likely be looking for a one-year deal if he comes back as he has publicly stated he wants to pitch in Japan again before retirement. At the outset of the offseason, the team was less-than-optimistic that Kuroda would choose to return.

Brian Cashman wants Hiroki Kuroda to return to Yankees in 2014 (10/2013): Kuroda will be a free agent once again

Yankees' Hiroki Kuroda not ready to say he’ll be back (09/2013): The soon-to-be free agent has to decide if he wants to keep pitching next season at age 39.

Yankees-Dodgers rained out: Hiroki Kuroda to face former teammates Wednesday in (06/2013): Former Dodger Kuroda was 41-46 with a 3.45 ERA in four seasons as a Dodger; Phil Hughes will start nightcap

Hiroki Kuroda pulls it together, pitches Yanks to 7-4 win (04/2013): Travis Hafner had RBI singles in his first two at-bats against Houston starter Philip Humber. The Yankees (16-10) pushed across two more runs in the fifth.

Hiroki Kuroda throws during Yankees batting practice (02/2013): Women are the online gaming industry's fastest growing demographic, and they're facing real and... - 9:42 am

Potential Targets: Hiroki Kuroda (10/2012): The Rangers are likely looking to upgrade their pitching staff via trade or free agency. We'll take a look at some possible options. Photo Credit: AP

- Hiroki Kuroda hopes to keep the New York Yankees in sole possession of first p (09/2012): Kuroda has not been sharp of late and lost to Oakland on Sunday, surrendering five runs (4 earned) and seven hits in 5 2/3 innings, as he dropped to 14-11 to go along with a 3.34 ERA. He also walked three batters, the first time he walked more than two batters in a start since June 19.

Yankees Fall to Indians Despite the Pitching of Hiroki Kuroda (08/2012): Hiroki Kuroda has the lowest earned run average of any Yankees starter with more than five starts, but since the team has a policy of not negotiating contract extensions during the season, they risk losing him.

Hiroki Kuroda steals show, snaps Yankees' losing streak, 4-1 (07/2012): SEATTLE — Ichiro Suzuki took off his helmet, bowed twice to the cheering fans at Safeco Field, then singled up the middle in his first at-bat with the Yankees.

Hiroki Kuroda keen for Yankees (06/2012): NEW YORK - After a calamitous couple of days for the Yankees pitching staff, Hiroki Kuroda provided some needed calm. All he had to do was be himself. His start yesterday was as good as any he has had since an unimpressive first two months.

Is Hiroki Kuroda gonna be OK in New York? (02/2012): I tend to greatly discount talk about players who won’t be able to play in New York due to the pressure or whatever. I mean, it’s a real thing I think, but it seems overplayed. These guys are pros. And with a handful of exceptions, guys who have fizzled in New York have done so for more…

Los Angeles Dodgers' Hiroki Kuroda worries about brother in Japan (03/2011): Dodgers pitcher Hiroki Kuroda is concerned about his brother and friends in Japan.