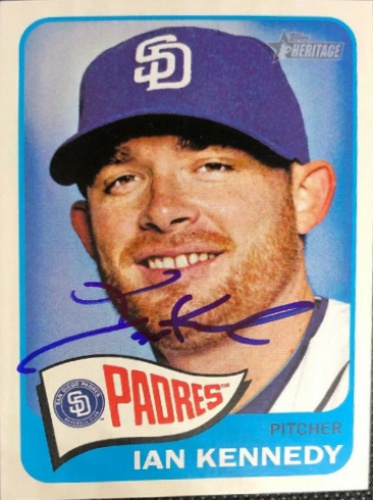 Current items with a signature of Ian Kennedy

These are the most current items with a signature of Ian Kennedy that were listed on eBay and on other online stores - click here for more items.

Traded items with a signature of Ian Kennedy

If you're interested in Ian Kennedy Rookie cards you might want to take a look at our sister site that specializes in Baseball Rookie Cards only.

The most expensive item with a signature of Ian Kennedy (2005 UPPER DECK USA BASEBALL SIGNED SET (23) CARDS - IAN KENNEDY, STUBBS, PRICE+) was sold in January 2016 for $95.96 while the cheapest item (Ian Kennedy Padres Yankees Royals Signed Auto MLB Baseball Spring Training Tampa) found a new owner for $0.01 in February 2018. The month with the most items sold (38) was May 2008 with an average selling price of $10.74 for an autographed item of Ian Kennedy. Sold items reached their highest average selling price in June 2017 with $49.99 and the month that saw the lowest prices with $0.01 was February 2018. In average, an autographed item from Ian Kennedy is worth $9.99.

Most recently, these items with a signature of Ian Kennedy were sold on eBay - click here for more items.

Diamondbacks sign pitcher Kennedy for one year (03/17/22): Veteran right-hander Ian Kennedy and the Arizona Diamondbacks finalized a one-year, $4.75 million contract on Wednesday that returns the 2006 first-round selection to one of his former clubs.

The Royals and Rangers are interested in Ian Kennedy (11/2014): Innings will be eaten, no matter where he goes.

Ian Kennedy up for Clemente award (09/2014): Honor given each year to MLB player representing game well on and off the field.

Padres pump brakes on shopping Ian Kennedy (07/2014): The Padres, an aggressive early seller, have slowed down and might merely make a small deal sending away outfielder Chris Denorfia and holding onto starter Ian Kennedy. Kennedy had been...

Padres acquire Ian Kennedy from Diamondbacks (07/2013): San Diego gets right-hander, a former USC star, in exchange for reliever Joe Thatcher, a minor league player and a draft pick. Struggling right-hander Ian Kennedy will get a chance for a fresh start with the San Diego Padres, thanks to a general manager who is familiar with his work.

PHOENIX -- Ian Kennedy had a bases-clearing triple and scattered five hits over (07/2012): Paul Goldschmidt homered and Willie Bloomquist added an RBI double for the Diamondbacks, who have won a season-high seven straight home games and five of six overall.

Ian Kennedy pitches Arizona Diamondbacks to series win over San Diego Padres (04/2012): Ian Kennedy struck out nine in six innings to remain perfect for his career against San Diego, and Jason Kubel doubled in the go-ahead run in the sixth inning to send the Diamondbacks to a 3-1 victory over the Padres on Thursday night.

Diamondbacks' Ian Kennedy set for Opening Day (03/2012): Ian Kennedy said he learned a thing or two when facing what resembled the Dodgers' everyday lineup Saturday in preparation for his Opening Day start against the Giants.

My Town: Ian Kennedy's Phoenix (02/2012): Living in the Arizona Desert has the D-Backs pitcher hooked on golf.

Ian Kennedy must lift the Diamondbacks one more time (09/2011): Bickley: So far, Ian Kennedy has responded to every challenge. Now comes a playoff game against the Brewers, and the biggest test yet.

Crasnick: Ian Kennedy blossoms into ace for Diamondbacks (08/2011): In second season with Arizona, righty has blossomed into an ace for NL West leaders

PHOENIX -- Ian Kennedy gave up four hits over seven innings to earn his 11th vic (07/2011): to beat the Milwaukee Brewers 4-0 on Thursday night and split the four-game series.

Arizona Diamondbacks extra innings: Ian Kennedy (04/2011): Each week, The Republic visits with a member of the Diamondbacks for a series of on-the-spot questions. This week: Right-hander Ian Kennedy.