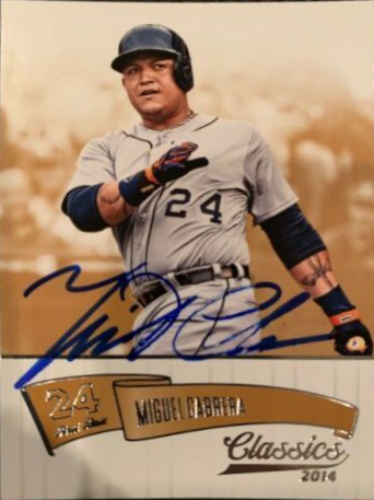 José Miguel Cabrera Torres (born April 18, 1983), nicknamed "Miggy", is a Venezuelan professional baseball first baseman and designated hitter for the Detroit Tigers of Major League Baseball (MLB). Since his debut in 2003 he has been a two-time American League (AL) Most Valuable Player (MVP) award winner, a four-time AL batting champion, and a 12-time MLB All-Star. He has played at first and third base for most of his major league career, but primarily played left and right field before 2006. He claimed the 17th MLB Triple Crown in 2012, the first to do so in 45 seasons. In 2022, Cabrera became the third player in history with a career batting average above .300, 500 home runs, and 3,000 hits, joining Hank Aaron and Willie Mays. More about Miguel Cabrera

Current items with a signature of Miguel Cabrera

These are the most current items with a signature of Miguel Cabrera that were listed on eBay and on other online stores - click here for more items.

Traded items with a signature of Miguel Cabrera

If you're interested in Miguel Cabrera Rookie cards you might want to take a look at our sister site that specializes in Baseball Rookie Cards only.

Most recently, these items with a signature of Miguel Cabrera were sold on eBay - click here for more items.

Tigers great Cabrera uncertain if he'll play in '23 (08/05/22): Miguel Cabrera, who had previously stated he would like to play in 2023, admitted Thursday he's not sure if this season will be his curtain call.

Pujols, Cabrera say they won't play in '23 WBC (07/20/22): Albert Pujols and Miguel Cabrera both said they would not play in next year's World Baseball Classic, saying they want younger players to take their spots.

MLB weekend recap: Byron Buxton adds to White Sox's woes; Miguel Cabrera celebra (04/2022): And coming up this week, the Mets should get some news on Jacob deGrom

Detroit Tigers' giveaways: Here's what you can get for free at Comerica Park in (02/2022): The announced Detroit Tigers giveaways for the 2022 season will honor Lou Whitaker, Juneteenth, Latino baseball and Miguel Cabrera (we think).

Samson: Tigers will release Miguel Cabrera before his contract runs out (05/2021): David Samson weighed in on Cabrera's future with the Tigers

Yankees ace Cole gives up 4 homers in 2 innings (03/2020): Gerrit Cole gave up homers on consecutive pitches to Detroit's Travis Demeritte and Miguel Cabrera in the first inning on Thursday.

Making The Contracts Of Cabrera, Heyward Disappear Like Cano's (12/2018): The Seattle Mariners were able to get the New York Mets to take on Robinson Cano's big contract in a trade. Here is a look at how the Detroit Tigers could do the same with Miguel Cabrera and the Chicago Cubs with Jason Heyward.

Detroit Tigers' Miguel Cabrera making progress, could start taking ground balls (02/2015): Cabrera is cleared to hit on the fields against a batting practice pitcher, but not against Tigers pitchers. So far, he has been hitting in the batting cages.

Detroit Tigers may use Alex Avila at first base if Miguel Cabrera isn't ready be (01/2015): Tigers manager Brad Ausmus confirmed Saturday that he has spoke with catcher Alex Avila about the possibility of playing some first base this season.

Miguel Cabrera posts surgery photos on Twitter, continues to rest during healing (11/2014): Translated to English, the Tweet reads: "Thanks to God getting better, thanks God for giving me the strength to play with a fractured foot."

Dave Dombrowski on Miguel Cabrera: “It’s worse than what we ever would have anti (10/2014): We learned yesterday that Tigers slugger Miguel Cabrera underwent surgery on Wednesday to remove bone spurs from his right ankle and repair a stress fracture to the navicular bone in his foot. Everyone was caught off guard by the extent of his injuries.

Miguel Cabrera sits Sunday with nagging ankle injury (08/2014): Tigers slugger Miguel Cabrera had to leave the second half of Saturday's doubleheader against the White Sox after struggling to make it down the first base line on a fourth-inning groundout. He's been battling a right ankle injury for several weeks, and it seems only to be getting worse.

Tigers manager Brad Ausmus slots Miguel Cabrera fourth, Rajai Davis second (07/2014): If you check the splits of Miguel Cabrera's career, he has batted cleanup almost as much as he's batted third. But whenever he bats cleanup for the Tigers instead of third, the question 'why?' must be asked.

Miguel Cabrera: The real Yankees Killer? (05/2014): Who's a Tiger killer? Sportsonearth.com's Matthew Kory picked every team's nemesis. A few nuggets from it:

Tigers week in review: Miguel Cabrera appears to be heating up (04/2014): Tom Gage of The Detroit News takes a look back at the Tigers' past week, and a look ahead to this week.

Motor City Bengals: Miguel Cabrera's contract is insane, but it's not that bad (03/2014): When comparing it to hardworking people such as police, firefighters, the armed forces, teachers, and others, including writers (sorry had to slip that one in there), it's just crazy, and it's not easy to wrap your mind around it.

Miguel Cabrera, other Detroit Tigers show support for Venezuela amid deadly prot (02/2014): Venezuela is facing a rash of violence of late as the government tries to subdue a protest movement with nighttime sweeps that have turned many parts of the socialist country into dangerous free-fire zones.

Tigers not yet committed to moving Miguel Cabrera to first; decision coming soon (11/2013): Who's on first? Who's on third? The Tigers continue to say they're not yet sure, even in the wake of reports out of Venezuela that Cabrera has informed ballclub brass he is open to moving back to first base.

Tigers' middling performance with ailing Miguel Cabrera is evidence of his value (09/2013): Even if you don't think Miguel Cabrera should be the Most Valuable Player, you can't deny how important he is to his team when healthy.

Miguel Cabrera a few homers away from securing second consecutive Crown (08/2013): It ended like so many conversations about Miguel Cabrera seem to do. Future Hall of Famer manager Tony La Russa discussed the ability of the Tigers slugger to vaporize baseballs.

Can Tigers slugger Miguel Cabrera make it as two-time Triple Crown winner? (07/2013): Nobody has ever led the league in home runs, RBIs and batting average in consecutive seasons, but the Tigers slugger is poised to make a run at doing just that.

Detroit Tigers' Miguel Cabrera, Angels' Mike Trout on deck for summer sequel of (05/2013): Cabrera's actually in the hunt for a second consecutive Triple Crown, while Trout has been red hot in May. Time to sit back and enjoy it.

Three stars: Miguel Cabrera, Prince Fielder each hit two-run homers in Detroit T (04/2013): Blister? What blister? Justin Verlander left his previous start with cracked skin on his pitching thumb, leaving some concerned that it might affect Tuesday's start. It didn't.

Canada sports TV confuses Melky Cabrera for Miguel Cabrera in PED graphic (01/2013): You know what the funniest thing about Canada is? It's the little differences. I mean, they got the same stuff over there that we got here, but just ... just there, it's a little different. [Also: Tampa Bay Rays still … Continue reading →

No offseason rust: Tigers' Miguel Cabrera wins home run derby in Venezuela (12/2012): The Tigers slugger won the home run derby in a Venezuelan all-star game on Monday, and the prize was 10,000 Bolivar, or the equivalent of about $2,300 U.S. dollars.

Detroit Tigers' Miguel Cabrera won the AL MVP, but can he win cover of 'MLB 13 T (11/2012): The game's cover campaign will begin Jan. 7 and Cabrera is one of the players expected to be available for the vote.

Bob Wojnowski: Commentary: Miguel Cabrera shows true grit in Tigers victory (08/2012): He was back out there, wincing away, swinging away. If there's one image that symbolizes the Tigers right now, it's the face of Miguel Cabrera. When September baseball dawns, redemption can come at any moment, and pain is no alibi.

Tigers' Jim Leyland calls Miguel Cabrera 'best hitter in baseball' (07/2012): When Miguel Cabrera stepped to the plate with one out in the third inning Monday night at Fenway Park, Omar Infante stood at third and Austin Jackson at first. The Tigers trailed, 2-1.

Despite second-inning error, Detroit Tigers' Miguel Cabrera continues to impress (06/2012): Detroit Tigers manager Jim Leyland hasn't heard much about Miguel Cabrera's shift to third base since the start of the season. That must mean the experiment is working.

Detroit Tigers' Prince Fielder takes page out of Miguel Cabrera's book to knock (04/2012): Fielder: "I saw the hole over there. I'm trying to learn from Miguel how to go that way. I'm trying mostly to stay up the middle, but I know if I'm a little late I've got a lot of space over there."

Detroit Tigers Links: MLB scouts, executives not buying Miguel Cabrera at third (01/2012): A small group, polled by ESPN.com's Jayson Stark, are convinced the Tigers' slugger will end up as the designated hitter sooner than later.

Tony Paul: Jim Leyland might bat Miguel Cabrera third in Tigers' lineup (12/2011): Since the Tigers acquired slugging first baseman Miguel Cabrera before the 2008 season, he has been almost exclusively the cleanup hitter in manager Jim Leyland's lineup. That could change in 2012.

Yankees vs. Tigers: Miguel Cabrera has made hitting look easy during historic se (09/2011): Cabrera has flourished since helping beat Yankees as a rookie with Marlins in 2003 World Series

Tigers without Miguel Cabrera, Brennan Boesch in series finale with Rays (08/2011): ST. PETERSBURG, Fla. -- The Detroit Tigers will be a bit shorthanded today when they close a four-game series against the Tampa Bay Rays. Miguel Cabrera is on the paternity list and is away from the team today as his wife gives birth to their third child.

Judge holds hearing in Miguel Cabrera's DUI case in Florida (07/2011): An attorney representing Miguel Cabrera is concerned the Tigers slugger will be unable to play in Canada if he is convicted of driving under the influence.

Tigers slugger Miguel Cabrera's DUI case pushed to July 12 (06/2011): Miguel Cabrera will have to wait a little longer before knowing if he's headed to trial in his Florida DWI case.

DETROIT -- Now that Miguel Cabrera 's back in Michigan with his teammates, he's (04/2011): His spring training problems aren't forgotten, but his game-winning hit Tuesday was a reminder of why he's so important to the Detroit Tigers. Cabrera's bases-loaded single in the bottom of the ninth gave the Tigers a 5-4 win over the Texas Rangers.

Michael Rosenberg: Baseball easiest part of Tigers 1B Miguel Cabrera's spring (02/2011): In his first two at-bats of an overly eventful spring training, Miguel Cabrera grounded out to Yankees third baseman Alex Rodriguez. This follows a well-known rule in baseball: All controversies somehow must be connected to A-Rod.