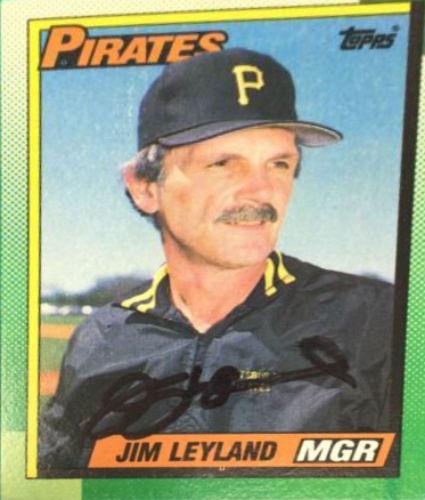 Current items with a signature of Jim Leyland

These are the most current items with a signature of Jim Leyland that were listed on eBay and on other online stores - click here for more items.

Traded items with a signature of Jim Leyland

The most expensive item with a signature of Jim Leyland (Jim Leyland Autographed Photo & Scorecard Framed) was sold in February 2008 for $449.99 while the cheapest item (Jim Leyland Signed Autograph 2005 Topps Fan Favorites) found a new owner for $0.25 in March 2009. The month with the most items sold (18) was December 2013 with an average selling price of $24.99 for an autographed item of Jim Leyland. Sold items reached their highest average selling price in November 2022 with $47.47 and the month that saw the lowest prices with $0.99 was November 2008. In average, an autographed item from Jim Leyland is worth $12.00.

Most recently, these items with a signature of Jim Leyland were sold on eBay - click here for more items.

Longtime MLB manager Jim Leyland's 'heart aches' for Barry Bonds after Hall of F (01/27/22): "You can make a case that he's the best player to ever play," Jim Leyland said of Barry Bonds, whom he managed with the Pittsburgh Pirates.

Jim Leyland: ‘I Don’t Know About That’ When Talking About Trading Porcello Or Pr (12/09/14): “I’m kind of surprised being here at the Winter Meetings that you really haven’t heard about Scherzer."

Jim Leyland Channels His Inner Teenager, Takes First Selfie [PHOTO] (11/06/14): Retirement must be nice for Leyland, because he seems much cheerier now that he's taken a behind-the-scenes role with the team.

Jim Leyland Reveals Carefree New Attitude To Jeff Riger, Laughs About ‘Cat And M (07/22/14): It's always nice to see the ole' skip at the ballpark...

Jim Leyland Enjoying New Role In Retirement (06/2014): COMSTOCK PARK, Mich. (June 27, 2014) — Even in retirement, Jim Leyland is still working in baseball. The man who led the Tigers to the American League pennant in 2006 and 2012 — along with three straight AL Central titles …

Detroit 9, Minnesota 3: Cabrera, Martinez hit 3-run homers on Jim Leyland Day (05/2014): The Detroit Tigers got a win for the old skipper. The team honored former manager Jim Leyland before the game with a video tribute and a ceremonial first pitch before this year's Tigers hammered the Minnesota Twins 9-3 at Comerica Park.

Transition from Jim Leyland to Brad Ausmus has been smooth (03/2014): Not only that, but the players believe it will continue to be smooth — because they learned from the outset not to try to compare Leyland to his replacement Brad Ausmus.

Jim Leyland arrives at Detroit Tigers camp, but plans to stay 'out of the way' (02/2014): Loading Photo Galleries ... LAKELAND, FLA. — As if he needed a credential for anyone to know who he is.

Has It Come To This For Jim Leyland? Son Mocks Him On Twitter (12/2013): Apparently when he left the world of head coaching, he also retired from the world of walking.

Mitch Albom: Jim Leyland, Judge Keith join in star-studded night (10/2013): It's called Detroit Legacies: In Black and White - an event I am proud to cohost with Judge Damon Keith. Because enough with the negative. That's not who we are. And for one big night for charity at the Fox Theatre, we're going to remind ourselves of it.

Tigers' Jim Leyland, Dave Dombrowski building impressive legacy together (09/2013): How much longer each man will remain in Detroit? And what might be their futures, either in terms of new job stops, or, in the case of Leyland, as a manager who someday will be considered for a Hall of Fame plaque?

Tigers' Jim Leyland, on A's series: We've been beat up these last three days (08/2013): The Tigers manager breaks down the lowlights and the (few) highlights in Wednesday's 14-4 loss to the A's at Comerica Park.

Tigers manager Jim Leyland reflects on latest trade, more (07/2013): He was on his office couch smoking a cigarette, the remnants of an earlier eaten cupcake in his ashtray. Along with some ashes, of course.

Detroit Tigers' Jim Leyland on Bruce Rondon: 'He's not brought back as the close (06/2013): Leyland: "I don't think he's a totally finished product yet. But I think he's made a tremendous amount of progress."

Jim Leyland on coach's decision to send runner: 'I'm sure Tommy would like to ha (05/2013): The Tigers threatened more than once later in the game, but the fifth inning provided them their best opportunity to score a run.

Jim Leyland On Manager Rants! [Blog] (04/2013): You never want the Tigers to lose however when they do, particularly in heartbreaking fashion, you at least want the Skipper to go nuts.

Tigers' Jim Leyland , on 4th outfielder Matt Tuiasosopo: 'This kid deserves a sh (03/2013): Matt Tuiasosopo was a big believer that he could make the Tigers when he signed as a free agent in late November.

Bob Wojnowski: Tigers' star-laden lineup making it easier for Jim Leyland (01/2013): This is not going to be easy. Look at the Tigers' star-laden roster and try to find issues to passionately debate. Oh, something will surface during a long summer, but right now, we're down to a few legitimate questions.

Jim Leyland appreciates Tigers' surplus of starting pitchers (12/2012): Among those cheered by news the Tigers had re-signed Anibal Sanchez is Leyland, the Tigers manager, who doesn't mind that his team has six starting pitchers. That could change before spring training, of course.

Fast facts about Tigers skipper Jim Leyland (10/2012): Who: Jim Leyland, returning for his eighth season as Tigers manager in 2013. Age: 68 on Dec. 15. Hometown: Perrysburg, Ohio. First among actives Leyland, 15th on the all-time list, has more victories than any other active manager. The top three:

Manager Jim Leyland takes blame for Tigers' Royal swoon (08/2012): The manager insisted he deserved blame for the Tigers' three-game nosedive against the Royals, which wrapped up Thursday night with a 2-1 Royals victory.

Tigers manager Jim Leyland: 'We'll find out if we're good enough' (07/2012): The Tigers sat idle while the trade deadline passed at 4 p.m. today. Manager Jim Leyland is just fine with that. He likes his team the way it is.

Detroit Tigers' Jim Leyland on adding hitting assistant: 'We've had so many guys (06/2012): A handful of major league teams have added to their coaching staff this season by bringing on board a second hitting coach -- a strategy the Tigers decided to test.

Detroit Tigers, Jim Leyland should have received reality check from Texas Ranger (04/2012): Lineups that include Brandon Inge and Ryan Raburn won't get it done against the American League's best.

Would Tigers take chance on a rookie manager after Jim Leyland? (11/2011): Hiring managers with little to no experience seems to be the new thing in baseball. Could you see the Tigers making a move like this?

Tigers' Jim Leyland: 'I will support Justin Verlander for the MVP to the hilt' (08/2011): Leyland has said that he doesn't think a pitcher should win the MVP but that he supports Verlander under the current system.