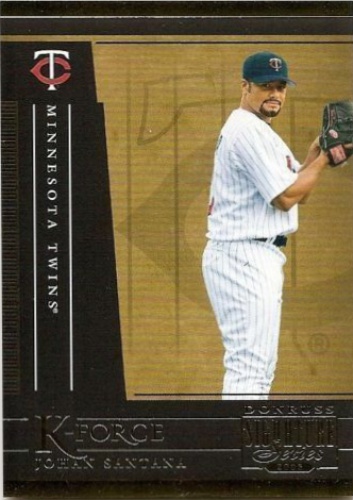 Johan Alexander Santana Araque (/ˈjoʊhɑːn/; born March 13, 1979) is a Venezuelan former professional baseball starting pitcher. Santana pitched in Major League Baseball (MLB) for the Minnesota Twins from 2000 to 2007 and for the New York Mets from 2008 to 2012. A two-time Cy Young Award winner with the Twins, Santana is a four-time All-Star and earned a pitching triple crown in 2006. On June 1, 2012, Santana pitched the first no-hitter in New York Mets history against the St. Louis Cardinals. More about Johan Santana

Current items with a signature of Johan Santana

These are the most current items with a signature of Johan Santana that were listed on eBay and on other online stores - click here for more items.

Traded items with a signature of Johan Santana

If you're interested in Johan Santana Rookie cards you might want to take a look at our sister site that specializes in Baseball Rookie Cards only.

The most expensive item with a signature of Johan Santana (Lot of 3 Johan Santana Signed Baseballs , Steiner COA) was sold in January 2008 for $360.00 while the cheapest item (Johan Santana Hand Signed Autograph Auto Photo w/COA) found a new owner for $0.98 in January 2009. The month with the most items sold (76) was June 2012 with an average selling price of $75.49 for an autographed item of Johan Santana. Sold items reached their highest average selling price in November 2015 with $150.00 and the month that saw the lowest prices with $0.99 was August 2019. In average, an autographed item from Johan Santana is worth $31.00.

Most recently, these items with a signature of Johan Santana were sold on eBay - click here for more items.

Johan Santana, Josh Thole talk 10-year anniversary of Mets only no-hitter which (03/28/22): Former Mets pitcher Johan Santana and former catcher Josh Thole reminisce about their famous night 10 years ago in June when they completed the Mets first no-hitter in franchise history. The guys react to the news of the moment being celebrated at Citi Field this May.

Johan Santana’s deal with the Blue Jays has an April 28 opt-out clause (03/2015): If he's called up to the majors Santana will get $2.5 million in guaranteed money.

Johan Santana shuts it down in winter ball because of shoulder (01/2015): Two-time American League Cy Young Award winner Johan Santana won't pitch during the rest of the Venezuelan Winter League season because of stiffness in his pitching shoulder.

Johan Santana’s improbable comeback continues (11/2014): PHOENIX – Johan Santana has not pitched in the majors since 2012. He was just returning last year from a traumatic shoulder injury when he tore an Achilles tendon. Yet,...

Johan Santana could join Orioles by mid-June (05/2014): “He has got to approve it, they have to approve it,” Showalter said. “So we’re not there yet, but that’s tentatively [the plan].

Minnesota Twins: Rehabbing Johan Santana still on free-agent radar (01/2014): Jason Kubel and Jason Bartlett could yet have some company in the Twins' reunion corner of the clubhouse.

Yanks considering taking a look at ex-Mets Johan Santana (12/2013): More information, and possibly an audition for scouts, might sway the Yanks to include Santana in a pool of starters competing for a rotation spot this spring.

Celebrity Real Estate: Johan Santana Takes a Loss on Upper East Side Apartment (11/2013): According to property records spotted by The Real Deal, ex-Mets pitcher Johan Santana just sold his 3BR/3.5BA apartment in 170 East End Avenue for $3.15 million, $10,000 less than he paid in...

Report: Johan Santana Wouldn’t Rule Out Re-Signing With Mets (10/2013): Last week, Sandy Alderson told WFAN host Mike Francesa that re-signing the 34-year-old is a "possibility." And Santana’s agent said on Tuesday that his client hasn't ruled out re-signing with the Mets.

Report: Johan Santana plans to pitch in 2014 (08/2013): The 34-year-old's six-year, $137.5-million contract expires at the end of this season, but the southpaw plans to catch on somewhere as a free agent this offseason.

Johan Santana visits Mets teammates at Citi Field (06/2013): Pitcher is rehabbing at the Hospital for Special Surgery in Manhattan

Baseball notes: Surgery for Mets' Johan Santana (03/2013): Johan Santana is set for another shoulder surgery that he hopes will save his career. The former New York Mets ace will have surgery Tuesday to repair the re-torn anterior capsule in his pitching shoulder, the team announced Saturday.

Mets push Johan Santana's exhibition debut to mid-March (02/2013): PORT ST. LUCIE, FLA. — Johan Santana’s first spring-training appearance of the year for the Mets has been pushed back until mid-March.

Ex-Twin Johan Santana says he's fine, but he hasn't played (11/2012): NEW YORK -- A few blocks from the boardwalk, the $137.5 million ace stood inside a church building. Johan Santana was wearing an orange windbreaker -- the same uniform worn by other charitable workers -- and handing out brown lunch bags to storm victims.

Mets shut down Johan Santana for the season due to lower back inflammation (09/2012): New York Mets starting pitcher Johan Santana throws during the first inning of a baseball game against the Washington Nationals at Nationals Park on Friday, Aug. 17, 2012, in Washington.

Mets' Johan Santana probably done for the season (08/2012): Stephen Strasburg could sit out his last two or three starts for Nationals. New York Mets ace Johan Santana is headed to the disabled list and not expected to pitch again this season.

Johan Santana Leads Mets Over Dodgers (06/2012): R. A. Dickey is receiving most of the publicity, but the Mets still regard Johan Santana as their ace, and he showed why on Saturday at Dodger Stadium.

Johan Santana on Track to Start Mets’ Opening Game (03/2012): Near the end of a tense but successful spring training, Johan Santana appears to have recovered from shoulder surgery.

Coleman: Mets Ace Johan Santana Speaks (01/2012): After shutting things down for two months in November and most of December, Mets ace Johnan Santana resumed throwing about three weeks ago. These are the early steps in the process, so what's the goal at the moment?

Bats: Johan Santana Not Yet Ready to Give Up on Return (08/2011): Santana arrived in New York on Thursday to have his surgically repaired shoulder examined by doctors after he reported discomfort in it earlier in the week.

Mets Johan Santana Throws Off Mound; Chris Young Out For Season (05/2011): Mets ace Johan Santana threw 15 pitches off a mound in Port St. Lucie. This is the first time Santana has thrown from the mound since undergoing Sept. 14 surgery to repair a torn anterior capsule in his left shoulder.