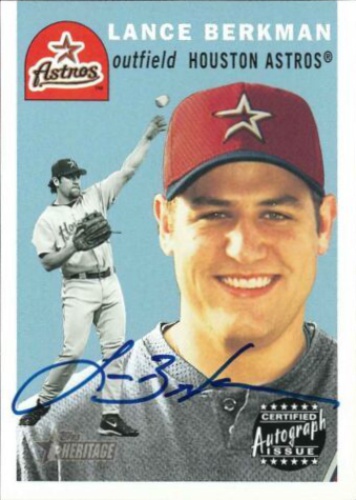 William Lance Berkman (born February 10, 1976), nicknamed "Big Puma", is an American baseball coach and former professional baseball outfielder and first baseman, who is the current head baseball coach of the Houston Baptist Huskies. He played 15 seasons in Major League Baseball (MLB) for the Houston Astros, New York Yankees, St. Louis Cardinals and Texas Rangers. Berkman is a six-time MLB All-Star and won a World Series championship and the National League Comeback Player of the Year Award with the Cardinals in 2011. He stands 6 feet 1 inch (1.85 m), and weighs 220 pounds (100 kg). Berkman spent various seasons of his career as a regular at all three outfield positions. More about Lance Berkman

Current items with a signature of Lance Berkman

These are the most current items with a signature of Lance Berkman that were listed on eBay and on other online stores - click here for more items.

Traded items with a signature of Lance Berkman

If you're interested in Lance Berkman Rookie cards you might want to take a look at our sister site that specializes in Baseball Rookie Cards only.

The most expensive item with a signature of Lance Berkman (Lance Berkman Autographed and Framed Red Astros Jersey Auto Tristar COA D1-L) was sold in March 2022 for $695.00 while the cheapest item (Lance Berkman Signed Auto 16x20 Baseball Photo Picture Cardinals Astros MVP COA) found a new owner for $0.01 in December 2012. The month with the most items sold (54) was June 2008 with an average selling price of $25.51 for an autographed item of Lance Berkman. Sold items reached their highest average selling price in September 2018 with $175.00 and the month that saw the lowest prices with $2.99 was December 2019. In average, an autographed item from Lance Berkman is worth $25.00.

Most recently, these items with a signature of Lance Berkman were sold on eBay - click here for more items.

Former MLB All-Star Lance Berkman joins baseball coaching staff at University of (01/08/21): The university is located in Houston, where Berkman spent much of his career

Breakfast With Joe Altuve and Lance Berkman — What Two Astros Greats Talk About (02/14/19): More than 550 baseball fans and generous contributors got up very early on this morning to hear, over bacon and eggs,  Lance Berkman interview Houston Astros great Jose Altuve, a popular visitor to SpringSpirit fields.

Lance Berkman surprised to be off Hall ballot in first year (02/14/19): In his first appearance on the ballot, Berkman garnered just five votes, good for only 1.2% of the total votes. Because he received less than five percent of the votes, which is the established cutoff, Berkman will never appear on the ballot again.

Wayne Graham: Lance Berkman 'steps back' from Rice baseball (01/2015): Former Houston Astros and Rice star Lance Berkman informed Owls baseball coach Wayne Graham on Monday that he had to leave his role as student assistant because of time constraints related to his family and his efforts to finish his education at Rice.

Rangers plan to activate Lance Berkman, Neftali Feliz on Sunday (08/2013): Leonys Martin expected to start tonight after another day off for his sprained right ankle.

Rangers notes: Lance Berkman remains sidelined with knee soreness (06/2013): The designated hitter believes he can avoid the disabled list after slipping on stairs.

Lance Berkman's first game in the field with Rangers proves uneventful (05/2013): Texas Rangers' Lance Berkman had an uneventful season debut at first base in the second game of the doubleheader.

Lance Berkman Talks World Series With RAGE (03/2013): Lance joined Richie and Greggo and detailed whether or not he'll ever play in the field, if he thinks the Rangers can go to the World Series and his thoughts on replacing Josh Hamilton.

Cleveland Indians fall as Lance Berkman shakes off rust in Texas Rangers' win (02/2013): SURPRISE, Ariz. (AP) — Lance Berkman knows he has rust. He’s not sure how much.

Kids turn out for Lance Berkman Field dedication at Sesser (12/2012): A little rain couldn’t dampen the spirits of Sesser residents Tuesday afternoon. Cardinals Care and the Redbird Rookies honored St. Louis first baseman Lance Berkman as the rain fell on the field named in his honor at the Sesser Sports Complex.

Report: Lance Berkman Says Red Sox Among Teams in ‘Tire-Kicking Mode’ for His Se (11/2012): Lance Berkman showed in 2011 that he still had some gas left in the tank, but a knee injury limited the veteran to just 32 games in 2012. Now, with Berkman available on the open market, there are a few teams at least willing to consider signing the slugger in the hopes of him bouncing [...]

End of the road for Lance Berkman? (10/2012): Cardinals general manager John Mozeliak told reporters today that "it's hard to imagine finding a fit for him here" when asked about Lance Berkman's future.

Lance Berkman may retire, return to Rice University (09/2012): St. Louis Cardinals first baseman Lance Berkman told FOX 26 Sports on Thursday if he chooses to retire this offseason, he has a plan in place which includes returning to Rice University to finish his degree and work as a student assistant for Owls baseball coach Wayne Graham.

Lance Berkman working way back toward Cardinals with Redbirds (08/2012): It only took Lance Berkman five innings Friday night to give his right knee a solid test.

Lance Berkman's knee injury not as bad as feared (05/2012): Cardinals first baseman Lance Berkman is expected to miss eight to 10 weeks following surgery Friday on his injured right knee. That's unexpected good news for a player who thought he might miss the rest of the season...

Lance Berkman: Marlins Park too spacious for homers (04/2012): Cardinals first baseman Lance Berkman predicted to reporters Wednesday that hitting a home run at Marlins Park is so difficult that one day soon they will have to shorten the distance to the fences.

Baseball: Lance Berkman upsets Selig and Cardinals (03/2012): JUPITER, Fla. _ Commissioner Bud Selig and the St. Louis Cardinals didn't exactly take the Puma to the woodshed this week, but they wasted little time calling him on the carpet.

Lance Berkman lifts Cardinals over Brewers in 11 innings (08/2011): MILWAUKEE - Lance Berkman singled in Matt Holliday with two out in the 11th inning and the St. Louis Cardinals...

The Schmuck Stops Here: Lots about Lance Berkman (06/2011): If you haven't already, make sure you read Dan Connolly's story about Chris Jakubauskas and Lance Berkman. It's a great account of the Berkman line drive that nearly ended Jak's career, with both players weighing in on how the incident affected them.

3 up, 3 down, National League: Lance Berkman is getting the last laugh with the (04/2011): Lance Berkman : The Cardinals were the laughingstock of the major leagues when they gave $8 million to this overweight 35-year-old with supposedly declining bat speed.