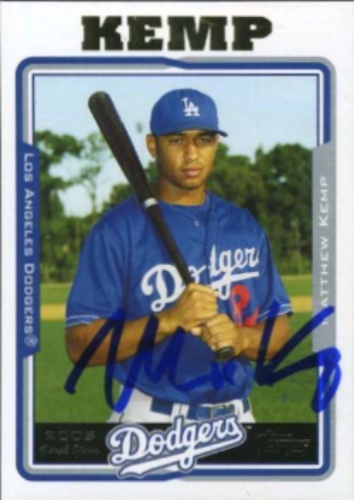 Matthew Ryan Kemp (born September 23, 1984) is an American professional baseball outfielder who is currently a free agent. He began his professional career in the Los Angeles Dodgers organization in 2003, and played in Major League Baseball (MLB) with the Dodgers from 2006 until 2014, the San Diego Padres in 2015 and 2016 and the Atlanta Braves in 2016 and 2017 before returning to the Dodgers for the 2018 season, and briefly playing for the Cincinnati Reds in 2019 and Colorado Rockies in 2020. He was named to three All-Star teams and won two Gold Glove Awards (2009 and 2011) and two Silver Slugger Awards (2009 and 2011). More about Matt Kemp

Current items with a signature of Matt Kemp

These are the most current items with a signature of Matt Kemp that were listed on eBay and on other online stores - click here for more items.

Traded items with a signature of Matt Kemp

Most recently, these items with a signature of Matt Kemp were sold on eBay - click here for more items.

Upbeat Matt Kemp thrives in return to Dodger Stadium (04/06/15): On the baseball calendar, this was opening day. For Matt Kemp, this was homecoming day.

Matt Kemp thinks the Padres have the best outfield in baseball. I don’t think he (02/2015): He's forgetting, it seems, that outfields also play defense.

Analysis: Matt Kemp's second half (01/2015): New Padres outfielder was as powerful as anyone after the break; will it play at Petco?

Orioles, Dodgers have discussed Matt Kemp trade (11/2014): According to FOX Sports' Ken Rosenthal, the Orioles recently reached out to the Dodgers to discuss a trade for outfielder Matt Kemp.

Dodgers' Matt Kemp named National League player of the month (09/2014): Matt Kemp doesn’t need confirmation from you, me or Major League Baseball to know he’s come a long way from the player who has returned from three surgeries.

Dodgers' Matt Kemp protests Clippers owner, walks up to Michael Jackson's 'Black (08/2014): Major League Baseball's players are now a part of the Donald Sterling fiasco after Deadspin released a new version of the recorded conversation between the Clippers owner and his girlfriend V. Stiviano.

Matt Kemp -- Screw Donald Sterling ... I'll Post My Own Pics with Magic! (04/2014): L.A. Dodgers star Matt Kemp -- one of the black guys Donald Sterling wouldn't allow on V. Stiviano's Instagram -- has responded to the disgraced Clippers owner ... with a pic of his own. Kemp went to Instagram moments ago and posted an old…

Dodgers' Matt Kemp advised by agent to not rush back for opening day (01/2014): Matt Kemp is aiming to return from his off-season ankle and shoulder operations in the Dodgers’ season-opening series in Australia. But Kemp's agent is advising him against pushing himself to play in the two-game set against the Arizona Diamondbacks.

Khloe Kardashian: Why She Put Matt Kemp Romance On Hold (12/2013): Khloe has been pretty quiet when it comes to her dating life and it turns out there’s a major reason why she hasn’t said anything!

Dodgers' Matt Kemp out for postseason (09/2013): The crutches resting along Matt Kemp’s locker was the dead giveaway something wasn’t right.

Matt Kemp isn't comfortable at bat, might not return Monday (08/2013): After center fielder Matt Kemp went hitless in his first eight minor league at-bats -- with one ball out of the infield -- Dodgers Manager Don Mattingly said Kemp might be asked to continue his rehabilitation assignment beyond Sunday.

Matt Kemp is not close to returning to the Dodgers (07/2013): Matt Kemp's ankle sprain is more serious thank initially thought, meaning the Dodgers will be without their outfielder for another few weeks.

Dodgers former hitting coach is confident Matt Kemp will find his form (06/2013): Jeff Pentland, who was fired by the Dodgers during the 2011 season, worked with Kemp during the outfielder's rehabilitation stint. He says Kemp will hit when he gets enough at-bats and repeats his swing.

Matt Kemp appears on 'Sesame Street' (03/2013): Matt Kemp fulfilled a lifelong dream this week prior to the Los Angeles Dodgers' game against the Angels. And no, it had nothing to do with baseball. Kemp teamed up with Abby — Abby Cadabby the Muppet, that is — to film a segment for "Sesame Street" that is set to air this Thursday.

DODGERS NOTEBOOK: Matt Kemp begins rehab for shoulder injury, which was worse th (10/2012): Matt Kemp began his rehabilitation program Wednesday in Arizona, and the Dodgers' center fielder is feeling "a little sore" 19 days after having surgery to repair a torn labrum in his left shoulder.

Dodgers crush Giants, 10-0, behind Chad Billingsley, Matt Kemp (07/2012): Right-hander pitches 7 1/3 strong innings while All-Star slugger hits a two-run home run in the first inning. Then there are those pristine afternoons where everything goes so perfectly according to plan, the wonder becomes how it doesn’t occur more commonly.

Dodgers say Matt Kemp 'a long shot' to play in All-Star game (06/2012): The Los Angeles Dodgers have all but ruled out injured slugger Matt Kemp for next month's All-Star game in Kansas City. "It's a long shot at this point because he's not healthy," general manager Ned Colletti said Monday before the opener of a three-game series at San Francisco.

Matt Kemp Injury: Dodgers Slugger Heads Back To 15-day DL (05/2012): Los Angeles Dodgers' Matt Kemp looks on after scoring on a double by Andre Ethier during the first inning of their baseball game against the Milwaukee Brewers, Wednesday, May 30, 2012, in Los Angeles.

Matt Kemp's 11th home run lifts Dodgers over Nats (04/2012): LOS ANGELES - What started as a welcoming party for the current top prospect in baseball ended as a celebration...

Why Matt Kemp Makes A Boatload Of Money From A Bankrupt Baseball Team (03/2012): This story appears in the April 9, 2012, issue of Forbes Magazine.

Matt Kemp MVP: 5 Reasons Why the Dodgers' Star Deserves the Award (10/2011): Kemp is the clear favorite to win the NL MVP.

Dodgers' Matt Kemp is the picture of a great player (09/2011): Kemp has matured into one of the game's best players, but he's not the MVP for this season. From Phoenix — When Matt Kemp mentions his mother has watched a Simers/plaschke video on The Times' website, I'm expecting him to tell me Plaschke frightens his mother.

LOS ANGELES -- Matt Kemp got his career-high 102nd RBI, Rod Barajas hit a two-ru (08/2011): It was the eighth win in nine games for the Dodgers, who went 17-11 in August to move into third place in the NL West. The Padres lost their season-high seventh in a row and finished 1-7 on their eight-game trip.

Marin's Perron develops charitable initiatives for sports celebrities like Pete (07/2011): DAVE PERRON is more than a glad-hander, more than just a guy who knows people. The Kentfield resident is the vice president of baseball and sports enterprises for the Prostate Cancer Foundation and the co-founder of the Win Forever charity project.

Matt Kemp, Dodgers Destroy The Twins (06/2011): MINNEAPOLIS (AP) — Matt Kemp had four hits, including his NL-leading 22nd home run, and the Los Angeles Dodgers had a little fun after a tough day by routing the skidding Minnesota Twins 15-0 Monday night.

Scenes from Spring Training: Matt Kemp shows hustle (02/2011): The “Matt Kemp is lazy and out of shape” meme got beat to death last year. Was there any truth to it? Sure, some. But it probably got overplayed because I’m not sure anyone is due as much garbage he got thrown on him in 2010. In light of all of that, I feel justified in…

Matt Kemp Sends Explicit Pictures to Other Women (01/2011): Denita Banks It looks like superstar Rihanna’s ex-boyfriend is ready to move on to other girls. What’s his method of seducing? Sending girls explicit pictures via text messages. read more

Rihanna splits from Matt Kemp (12/2010): The Barbados-born beauty and the baseball star called time on their 11-month relationship after struggling to find the time to see one another.