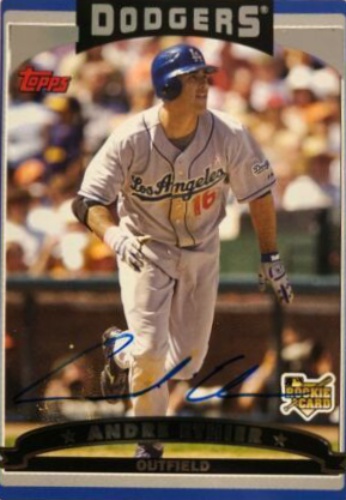 Andre Everett Ethier (/ˈiːθiər/; born April 10, 1982) is an American former professional baseball outfielder. He played in Major League Baseball (MLB) for the Los Angeles Dodgers from 2006 to 2017 and is second all-time in post-season appearances as a Dodger with 51. More about Andre Ethier

Current items with a signature of Andre Ethier

These are the most current items with a signature of Andre Ethier that were listed on eBay and on other online stores - click here for more items.

Traded items with a signature of Andre Ethier

If you're interested in Andre Ethier Rookie cards you might want to take a look at our sister site that specializes in Baseball Rookie Cards only.

The most expensive item with a signature of Andre Ethier (Andre Ethier Hand Signed Autographed Custom Framed Jersey LA Dodgers PSA/DNA) was sold in June 2013 for $549.99 while the cheapest item (ANDRE ETHIER Signed Autographed 2006 Bowman Chrome auto) found a new owner for $0.26 in July 2008. The month with the most items sold (39) was May 2011 with an average selling price of $16.55 for an autographed item of Andre Ethier. Sold items reached their highest average selling price in September 2021 with $99.75 and the month that saw the lowest prices with $1.75 was October 2020. In average, an autographed item from Andre Ethier is worth $18.99.

Most recently, these items with a signature of Andre Ethier were sold on eBay - click here for more items.

Andre Ethier OK after hit on elbow in Dodgers' 2-1 loss to White Sox (03/31/15): Late scares in spring training are the worst. At this point, teams have pretty much decided on how they’re going to break camp, players are rounded into shape and finally honed, and everybody is all packed to go home.

Chad Gaudin sidelined, Andre Ethier goes deep in Dodgers' 6-4 loss (03/21/15): Interesting couple of days for the Dodgers’ pitching staff. Hyun-Jin Ryu goes down with a sore shoulder, Clayton Kershaw gets a tooth chipped and then loses again, and now on Saturday, they lost one of their best-looking rotation replacements.

Andre Ethier: “I want the opportunity to play every day” (03/2015): Carl Crawford, Joc Pederson, and Yasiel Puig are expected to open the 2015 season as the Dodgers' primary starting outfielders.

Orioles, Dodgers have discussed Andre Ethier trade (01/2015): The Orioles have been linked in recent weeks to free agents Colby Rasmus, Norichika Aoki, and Ichiro Suzuki. But trading for a new outfielder is another route being explored by the Baltimore front office.

Andre Ethier the likeliest of Dodger outfielders to be traded (11/2014): The Dodgers are looking to trade one of their outfielders, and it sounds like Andre Ethier is the most likely to go.

Why the Dodgers should hang on to Andre Ethier (10/2014): Here’s an idea sure not to warm the cockles of most Dodgers fans’ hearts:

Andre Ethier takes the high road about limited role with Dodgers (09/2014): For years he was everywhere, but suddenly he's nowhere.

Andre Ethier would like someone to explain his current Dodgers' role (08/2014): Remember Andre Ethier?

Andre Ethier's 3-run HR rallies Dodgers over D-backs (04/2014): LOS ANGELES -- Dan Haren didn't let a little thing like a four-run inning discourage him. He had plenty of confidence in his teammates' ability to get him some runs, and they didn't disappoint him against a pitcher they'd never seen before.

Andre Ethier irritated by questions about Sydney playing surface (03/2014): SYDNEY, Australia -- As much as bombastic Dodgers President Stan Kasten tries to convince people otherwise, it’s clear not all of his players like the idea of starting their season on the other side of the world.

Maybe Andre Ethier should check to see if Elba is still available (02/2014): Poor Andre Ethier, we knew him well. Hope he enjoys his next stop in Houston, or Siberia, or Guantanamo Bay, or wherever he’s headed.

Dodgers Outfielder Andre Ethier Breaks Out Plaid Suit (10/2013): Los Angeles Dodgers outfielder Andre Ethier is the latest star to break out an interesting outfit, courtesy of the Dodgers' official Twitter account: The team gave him a fantastic grade, but what grade does his plaid suit deserve?

Coming to praise the season of Dodgers' outfielder Andre Ethier (08/2013): The argument could be made that Andre Ethier is having his worst professional season, you know, if you were like a negative blogger or something.

Andre Ethier, Dodgers start second half with 3-2 win over Nationals (07/2013): Either hits a ninth-inning home run and Ricky Nolasco pitches out of trouble as the Dodgers win for 18th time in 23 games.

Yasiel Puig and Andre Ethier spark Los Angeles Dodgers to 6-4 win over Philadelp (06/2013): The Dodgers have won six straight games to close the gap in the National League West.

Surprisingly, a reasoned Andre Ethier emerges from Wednesday circus (05/2013): After Manager Don Mattingly calls him out and benches him, the often-volatile Ethier is even-keeled, saying he is disappointed Mattingly didn't address his concerns directly to him. Now Wednesday was an interesting little day, no?

Dodgers play ping-pong and Andre Ethier crowned chopsticks king (02/2013): PHOENIX – With their first Cactus League game not scheduled until Saturday, the Dodgers are finding different ways to amuse themselves.

Report: Andre Ethier trade ‘not happening’ (10/2012): Rumors of the Dodgers trading Andre Ethier are “short-lived,” according to Jon Heyman of CBS Sports.

Andre Ethier still wants to play every day (09/2012): Despite his lack of success against left-handers, the right fielder doesn't like the idea of being a platoon player. Andre Ethier smiled when asked about how Manager Don Mattingly hinted he might be turned into a platoon player next season.

Andre Ethier's blister further threatens his power down stretch (08/2012): Things for the Dodgers to Worry About: Part 52 in a continuing series.

LOS ANGELES -- The Los Angeles Dodgers have activated star outfielders Matt Kemp (07/2012): to Triple-A Albuquerque. Kemp, hitting .355 with 12 home runs and 28 RBIs, missed 51 of the Dodgers' previous 53 games because of a left hamstring strain. They were 24-27 in his absence.

Andre Ethier's great start is somehow getting little notice (05/2012): Andre Ethier leads the National League in RBI with 42, second in the majors only to Texas' Josh Hamilton. ( Lenny Ignelzi / Associated Press / May 27 , 2012 )

GLENDALE, Ariz. -- The Los Angeles Dodgers need Andre Ethier to be healthy and p (02/2012): So far, so good. Ethier appears ready to go after surgery on his left knee late last season. After hitting .311 in the first half and being picked as an All-Star injury replacement, Ethier struggled late.

Andre Ethier talks goals, following dreams with local youth (01/2012): Miles from where he grew up and blocks from where he now calls home, Andre Ethier spent his Saturday answering questions from a gymnasium full of children at the Chandler/Gilbert Family YMCA.

2011 MLB Trade Rumors – Andre Ethier to Atlanta Braves? (11/2011): The MLB season has been over for a month now and already teams have made deals to strengthen their clubs for next season. The winter meetings are just a few weeks away and more moves will happen as teams . . .

Andre Ethier sounds like the next Dodger to escape (08/2011): Kevin Roderick: The Dodgers have approximately two hitters on their roster who would be everyday players on a good team, and the one that isn't Matt Kemp appears to be burning his personal bridges.

Andre Ethier, All-Star, Latin rap aficionado, swings to Delinquent Habits (07/2011): The attendance statistics read 35,249, but Sunday's crowd at Dodger Stadium felt even smaller. It's been that sort of year for the congregation at Chavez Ravine, part of the flop that's occured since their owner decided to turn the team...

Andre Ethier, Hong-Chih Kuo are key in Dodgers' 6-1 win over Detroit (06/2011): Outfielder hits a two-run home run and reliever returns from the disabled list to throw a perfect eighth inning, helping the club win its third game in a row. The Dodgers are on the verge of the unthinkable.

MLB Looking Into Andre Ethier’s Obscene Gesture (05/2011): Major League Baseball is looking into photos of Dodgers outfielder Andre Ethier making an obscene gesture on the field before a game.

Dodgers' Andre Ethier looks to be team leader (02/2011): Outfielder says all the good teams have such a figure and he is willing and ready to accept the challenge. Something changed when Manny Ramirez was hit with a drug-related suspension two years ago.

Four Questions With Andre Ethier (12/2010): Andre Ethier has been slugging his way to stardom out in Hollywood, but this week, the young outfielder  is one of many baseball players who will be trading his bat for a driver.