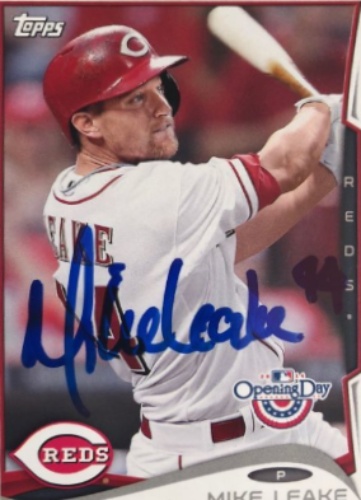 Current items with a signature of Mike Leake

These are the most current items with a signature of Mike Leake that were listed on eBay and on other online stores - click here for more items.

Traded items with a signature of Mike Leake

The most expensive item with a signature of Mike Leake ((12) Mike Leake Signed Auto Autographed ROMLB Manfred Baseball Cardinals) was sold in December 2017 for $76.00 while the cheapest item (Cincinnati Reds Pitcher Mike Leake Hand SIGNED Index Card) found a new owner for $0.25 in October 2012. The month with the most items sold (14) was June 2010 with an average selling price of $20.99 for an autographed item of Mike Leake. Sold items reached their highest average selling price in December 2017 with $76.00 and the month that saw the lowest prices with $0.99 was January 2023. In average, an autographed item from Mike Leake is worth $14.00.

Most recently, these items with a signature of Mike Leake were sold on eBay - click here for more items.

D-backs' Leake opts out of playing 2020 season (06/29/20): Diamondbacks right-hander Mike Leake is opting out of the 2020 season, his agent said in a statement Monday, becoming the first known MLB player to opt out.

Diamondbacks' Mike Leake becomes first known MLB player to opt out of 2020 seaso (06/29/20): As part of MLB's COVID-19 guidelines, players can decide to opt out at anytime

D-backs righty Leake has fracture on left wrist (02/13/20): Arizona Diamondbacks right-hander Mike Leake has a fracture on his non-throwing wrist but still hopes to be ready for the beginning of the regular season.

Reds 3, Diamondbacks 0: Reds’ offense contributes; Mike Leake does rest (07/2014): CINCINNATI (AP) — Mike Leake pitched into the eighth inning and singled home a run — a rare commodity for the Reds these days — leading Cincinnati to a 3-0 victory over the Arizona Diamondbacks yesterday night.

Mike Leake seals out Giants, 8-3 (07/2013): Mike Leake pitched six-plus innings of wildly effective ball and had the third three-hit game of his career, leading the Cincinnati Reds past the San Francisco Giants 8-3 on Wednesday night.

Cincinnati Reds to start Mike Leake against Giants in Game 4 of NLDS (10/2012): Reds take ace Johnny Cueto off roster and activate Mike Leake to start Game 4 against Barry Zito and the Giants on Wednesday