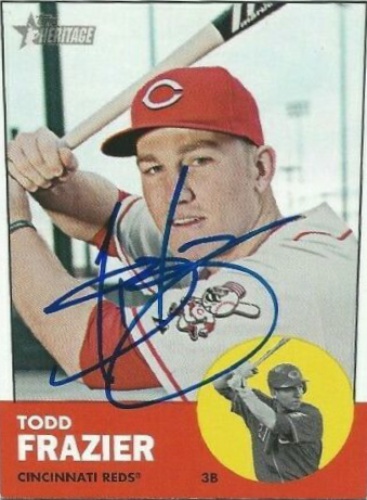 Current items with a signature of Todd Frazier

These are the most current items with a signature of Todd Frazier that were listed on eBay and on other online stores - click here for more items.

Traded items with a signature of Todd Frazier

Most recently, these items with a signature of Todd Frazier were sold on eBay - click here for more items.

Pirates DFA slumping veteran INF Todd Frazier (05/10/21): Todd Frazier was designated for assignment by the Pirates on Monday to make room for Ben Gamel on the roster.

Mets add Miguel Castro, Todd Frazier, Robinson Chirinos in flurry of deals prior (08/2020): The Mets added to their bullpen and bench prior to the deadline

WATCH: Will Ferrell debuts with Cincinnati Reds, mans third base for N.J.'s Todd (03/2015): See how the comedian fared at the hot corner.

Todd Frazier and other pros to speak at TR sports forum (01/2015): A sports forum for student athletes will be held at Pine Belt Arena Thursday night.

Todd Frazier on Kyle Seager’s seven-year, $100 million extension: “I’m aware of (12/2014): Earlier this month, Seattle bought out all three of Kyle Seager's arbitration seasons and four seasons of free agency with a seven-year, $100 million extension. Todd Frazier plays the same position as Seager, is only one year older than Seager, and had very similar numbers to Seager in 2014 ...

Arbitration Breakdown: Todd Frazier (11/2014): Over the next few weeks, I will be discussing some of the higher profile upcoming arbitration cases. I will rely partly on my arbitration model developed exclusively for MLB Trade Rumors, but will also break out some interesting comparables and … Continue reading →

Todd Frazier of New Jersey sets high expectations for Cincinnati Reds in 2014 (04/2014): Nearly 36,000 runners set out from the Boston Marathon starting line with security tight along the... - 2:36 pm

LOOK: Jeter photo with 12-year-old Todd Frazier (02/2014): Derek Jeter announced he was retiring after the 2014 season, and he had what you could call a full career.

Cincinnati Reds' Todd Frazier inducted into All Sports Museum of Southern New Je (01/2014): A hero of the Toms River team that won the 1998 Little League World Series, Frazier is entering his second season as the starting third baseman for the Reds.

GIF: Todd Frazier's awkward RBI single (08/2013): In a game of many big hits, Todd Frazier's RBI single in the eighth inning off of Diamondbacks Brad Ziegler may not have been the biggest, but it was certainly the strangest.

Todd Frazier leads Cincinnati Reds over San Franscisco Giants 8-1 in rain-shorte (07/2013): Todd Frazier homered and drove in four runs, leading Cincinnati out of its offensive slump to a victory over San Francisco in a game shortened to six innings because of rain.

Cincinnati Reds | Todd Frazier's home run was a long shot (04/2013): Todd Frazier thought the measurement system was off a bit. His home run, which landed on the deck of the steamboat above center field, traveled 480 feet, by the Cincinnati Reds' estimate. "I thought it went farther. It thought it was 500 feet," Frazier said.

Rookie Todd Frazier busts into Reds' Game 4 lineup (10/2012): Make an error in the 10th inning, get yanked from the next game's lineup.