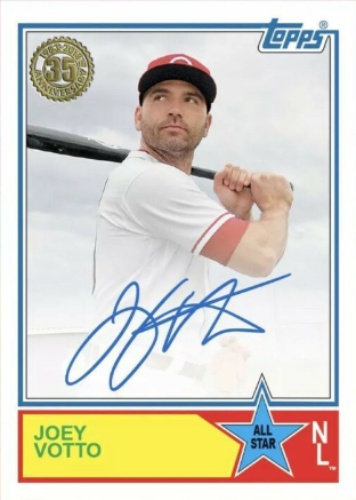 Joseph Daniel Votto (born September 10, 1983) is a Canadian-American professional baseball first baseman for the Cincinnati Reds of Major League Baseball (MLB). He made his MLB debut with the Reds in 2007. He is the first Canadian MLB player since Larry Walker to hit 300 home runs and have 1,000 career runs batted in (RBIs). Votto is also the second Canadian to have 2,000 hits. More about Joey Votto

Current items with a signature of Joey Votto

These are the most current items with a signature of Joey Votto that were listed on eBay and on other online stores - click here for more items.

Traded items with a signature of Joey Votto

If you're interested in Joey Votto Rookie cards you might want to take a look at our sister site that specializes in Baseball Rookie Cards only.

Most recently, these items with a signature of Joey Votto were sold on eBay - click here for more items.

WATCH: Reds star Joey Votto makes TikTok video with young fan at game (06/14/22): Votto went hitless with a walk in a 5-4 win, but he still stole the night with what became a viral moment

Reds activate Votto off IL before Toronto series (05/21/22): The Cincinnati Reds activated Canadian slugger Joey Votto off the injured list before Friday's game in Toronto against the Blue Jays.

Even MLB All-Star Joey Votto was talking Masters while wearing mic for ESPN2 on (04/2022): Joey Votto of the Cincinnati Reds wore a microphone and talked golf and the Masters during a live telecast.

Joey Votto extends home run streak to seven straight games; the record is eight (07/2021): With two multi-homer games in that stretch, Joey Votto has nine homers in his past seven games

Reds' Votto serves one-game ban for outburst (06/2021): Reds first baseman Joey Votto was out of the lineup Tuesday as he served a one-game suspension for his outburst during Saturday's game against the Padres.

WATCH: Reds' Joey Votto pulls off triple play that paves way for comeback win (04/2021): Votto made a great catch, dove to tag a runner and then tripled up a runner off third

Votto back with Reds after bout with COVID-19 (03/2021): First baseman Joey Votto returned to Reds camp Sunday after sitting out with COVID-19, but when he might be able to play again is still uncertain.

Reds' Joey Votto activated from COVID-19 injured list day after reportedly self- (08/2020): Votto is in Cincinnati's lineup on Monday niight

MLB opening weekend: One takeaway for each team, including resurgences for Joey (07/2020): Five percent of the 2020 regular season is already behind us

Why Joey Votto's Hall of Fame resume could take another hit in a shortened 2020 (05/2020): The Reds first baseman is coming off the worst statistical season of his career

Reds' Joey Votto stars in MLB Network oral history of Roy Halladay no-hitter (01/2019): Halladay walked just one and faced 28 batters in the Phillies' 4-0 win against the Reds in NLDS Game 1 on Oct. 6, 2010 at Citizens Bank Park.

Joey Votto: “Man, I think I’m a bad mother [expletive]-er.” (04/2015): Joey Votto was colorful in describing himself to the media after hitting a pair of home runs on Friday night.

WATCH: Joey Votto talks about season of regret (02/2015): Watch Joey Votto in the batting cage and hear him talk with 9 On Your Side Sports Director John Popovich.

Reds GM Walt Jocketty says Joey Votto is “doing great” (11/2014): It sounds like things are going well for Joey Votto, who missed the entire second half of the 2014 season with a quad injury.

Joey Votto is still feeling discomfort in his quad (08/2014): Joey Votto hasn't been progressing as well from his quad injury as the Reds would have liked.

MLB notes: No timetable for Joey Votto's return (05/2014): Cincinnati Reds first baseman Joey Votto is eligible to come off the disabled list Saturday, but manager Bryan Price said there is no timetable for his return from a strained left quad.

A newly open Joey Votto is in his 'sweet spot' (02/2014): For the last month, Joey Votto has appeared weekly on WLW-AM's SportsTalk with host Lance McAlister, trying to let Reds fans see him as a person, hear his voice, know his personality.

Will Joey Votto be a Hall of Famer? (01/2014): John Erardi projects and analyzes the eventual Hall of Fame chances of the Reds' first baseman, based on what he's done so far.

Let's Listen To Joey Votto Scream "Fuck!" Over And Over Again (05/2013): Joey Votto was struck out by Ubaldo Jimenez in the first inning of yesterday's Indians-Reds game. He was not happy about that, as evidenced by this torrent of fucks. Enjoy all the fucks. h/t Dan

Joey Votto: "I'm headed in the right direction" (04/2013): Joey Votto, the $225 million bat that the Reds franchise is built around, does not have a home run since returning from two knee surgeries last year.

Reds manager planning for Joey Votto's return Monday (08/2012): Cincinnati Reds manager Dusty Baker says he would like to have injured first baseman Joey Votto back in the lineup on Monday. Votto is on a rehabilitation assignment with Single-A Dayton

CINCINNATI, Ohio -- When Joey Votto had knee surgery, the Cincinnati Reds were f (07/2012): How have the Reds responded? With one of the best surges in franchise history. The Reds have won 10 in a row heading into the start of their series against the San Diego Padres on Monday night at Great American Ball Park. It's only the eighth time in club history that they've won 10 straight.

Joey Votto's shot at history hangs in the ballots (06/2012): Joey Votto appreciates baseball history. So anytime he's about to join two Hall of Famers and one future Hall of Famer on a list, he realizes the significance of it. Votto leads the National League All-Star voting with 4,475,180 votes.

Reds finalize deal with Joey Votto (04/2012): NEW YORK (AP) — Joey Votto will be spending some of the quarter-billion dollars the Cincinnati Reds are giving him on his own comfort.

Joey Votto helps Cincinnati beat Cubs 4-2 in 13 innings (09/2011): CHICAGO — Joey Votto hit a tiebreaking RBI double in the 13th inning and the Cincinnati Reds rebounded for a 4-2 victory over the Chicago Cubs after blowing a two-run lead in the ninth Tuesday night.