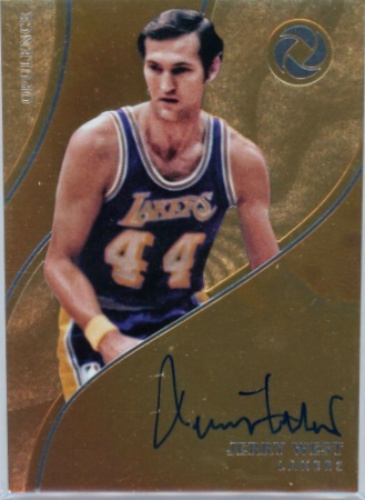 Jerome Alan West (born May 28, 1938) is an American basketball executive and former player. He played professionally for the Los Angeles Lakers of the National Basketball Association (NBA). His nicknames included "Mr. Clutch", for his ability to make a big play in a clutch situation, such as his famous buzzer-beating 60-foot shot that tied Game 3 of the 1970 NBA Finals against the New York Knicks; "the Logo", in reference to his silhouette being incorporated into the NBA logo; "Mr. Outside", in reference to his perimeter play with the Los Angeles Lakers; and "Zeke from Cabin Creek", for the creek near his birthplace of Chelyan, West Virginia. West played the small forward position early in his career, and he was a standout at East Bank High School and at West Virginia University, where he led the Mountaineers to the 1959 NCAA championship game. He earned the NCAA Final Four Most Outstanding Player honor despite the loss. He then embarked on a 14-year career with the Los Angeles Lakers, and was the co-captain of the 1960 U.S. Olympic gold medal team, a squad that was inducted as a unit into the Naismith Memorial Basketball Hall of Fame in 2010. More about Jerry West

Current items with a signature of Jerry West

These are the most current items with a signature of Jerry West that were listed on eBay and on other online stores - click here for more items.

Traded items with a signature of Jerry West

If you're interested in Jerry West Rookie cards you might want to take a look at our sister site that specializes in Basketball Rookie Cards only.

Most recently, these items with a signature of Jerry West were sold on eBay - click here for more items.

On this date: Jerry West retires from the Lakers (08/08/22): On Aug. 7, 2000, perhaps the most important Laker of all - Jerry West - left the franchise he built into the gold standard of basketball.

On this date: Jerry West hits long bomb against Knicks in NBA Finals (04/30/22): On April 29, 1970, Jerry West hit perhaps his most iconic clutch shot against the New York Knicks in the NBA championship series.

Jerry West willing to take HBO to Supreme Court over “Winning Time” (04/27/22): Lakers Hall of Famer Jerry West continues to be mad about how he has been portrayed in the HBO series "Winning Time."

Jerry West calls relationship with Lakers 'horrible,' says it's 'too late' for a (02/2022): West went so far as to suggest he wishes he never would've played for the Lakers

Daily statistical milestones: Kyle Lowry moves past Jerry West and more (12/2021): Here's your daily recap of movements in the all-time lists for scoring, rebounds, assists, blocks, steals and three-pointers after yesterday's games. Kyle Lowry No. 32 in assists now Moved ahead of Jerry West with 6,244 assists. He's now 62 away ...

Jerry West: Why my Mountaineers could shock Kentucky (03/2015): CLEVELAND — He is a native son of West Virginia, The Pride of West Virginia, a Hall of Fame player and executive who is living proof you can take the...

Warriors: Jerry West couldn't sleep after Klay Thompson's big night (01/2015): Jerry West knows the feeling Klay Thompson was feeling Friday night. He has often reflected about a game in which he made 16 of 17 shots and also made all 12 of his free throws.

Jerry West no fan of NBA’s highly-touted draft class (02/2014): If Jerry West still ran an NBA franchise, he wouldn’t be tanking for this year’s draft class. In fact, the Hall of Famer and former NBA executive said he was...

At 75, you still wouldn't want to challenge Jerry West to a game of H-O-R-S-E (12/2013): At 75, Jerry West hasn't lost his touch. Check out the former Laker great as he puts on a shooting exhibition for some students.

Jerry West believes in Panthers' Newton (07/2013): SPARTANBURG, S.C. (AP) -- NBA legend Jerry West jokes that while Cam Newton may not have what it takes to play power forward in the NBA, the Panthers quarterback certainly has the makeup to lead Carolina

Jerry West leads states bevy of sports stars (06/2013): CHARLESTON, W.Va. -- When I heard about the Gazettes sesquicentennial tribute to West Virginia, I advised that the sports section cover simply be of the NBA logo. Over it could have been this simple, yet cocky headline: "Our guy."In regar...

Lakers Legend Jerry West Scores Big For Son (03/2013): L.A. Lakers legend Jerry West is a slam dunk for best dad ever ... dropping $1.3 mil on a condo for his 24-year-old son.  No justice.The 3,000-square-foot condo sits on a golf course in the exclusive MountainGate complex on L.A.'s…

Jerry West says he was 'blessed' to work for Jerry Buss (02/2013): The Golden State Warriors released a statement from former Lakers All-Star and general manager Jerry West regarding Jerry Buss, who died on Monday.

Jerry West: 'I've never worked a day in my life' (12/2012): For all the great players, great coaches and colorful owners the Lakers have had, no man has exerted more influence over the franchise from more positions -- player, coach, executive -- over a longer period of time than Jerry West.

Jerry West: 'When I look at this Lakers team, I see flaws in it' (11/2012): Jerry West discusses the Warriors in an Oct. 1 interview. The Lakers legend is on Golden State's executive board. / Kyle Terada, US Presswire Before Magic Johnson, "Mr. Clutch" was Mr. Laker.

‘It was time to tell the true story of Jerry West’ (08/2012): Jerry West is almost as much a symbol of West Virginia as a piece of coal, a cardinal or a “flying WV.”

Inside WRAL: The real heart of Jerry West (07/2012): This “Behind the scenes of WRAL TV” story – and a personal brush with fame – requires a bit of background which involves my youth while growing up in Raleigh.

Jerry West wows crowd at Book Faire and Chocolate Fest (04/2012): MARTINSBURG - Jerry West has never gotten used to being a literal icon. "It's embarrassing," he said Saturday. "I've never looked at myself that way, never thought of myself that way.

NBA great Jerry West kicks off book festival (03/2012): West acknowledged that writing the book forced him to confront things in his life that he would have rather forgotten or, perhaps in hindsight, hadn’t fully dealt with.

Tickets to see, hear Jerry West on sale (02/2012): MARTINSBURG - Tickets for Jerry West's appearance at the Book Faire and Chocolate Festival in downtown Martinsburg are on sale.

Baddeley & Jerry West Compare Sports (01/2012): Basketball legend Jerry West has stepped away from active management of NBA teams and is dabbling in other activities.

Jerry West: A Face Behind the Icon (11/2011): At the bar inside Bergamot Station, a popular art gallery in Santa Monica, Jerry West stood engaged in a conversation with a fan. A few minutes later, the fan left the bar, shaking his head in awe. It turns out he had been impressed by much more than West's suave silver suit.

Anne Phillips: West By West, an Hour With Jerry West (09/2011): Jerry West the iconic basketball player, gave a preview of his upcoming book at a Los Angeles Chamber of Commerce luncheon this week.

Kawakami: Jerry West has plenty to say about Warriors (05/2011): Jerry West, the NBA world s most interesting man, got on a roll Tuesday, stayed on a roll and might not be slowed or stopped for months or years.

Jerry West calls for more attention to heart condition (04/2011): CHARLESTON, W.Va. -- Stress, sleepless nights and a racing heart were a normal part of basketball legend Jerry Wests life. But when the feelings of anxiety and fatigue continued away from the basketball court, the West Virginia native, former coach and ...

Lakers may respond more to Boston than Jerry West (01/2011): Text messages from press row… Perhaps an impending Sunday date with the Boston Celtics had more to do with the Lakers' tightening the screws than a few biting words from Jerry West .…