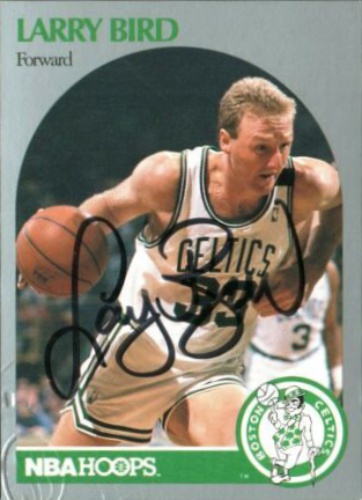 Larry Joe Bird (born December 7, 1956) is a former American professional basketball player, coach, and executive in the National Basketball Association (NBA). Nicknamed "the Hick from French Lick" and "Larry Legend," Bird is widely regarded as one of the greatest basketball players of all time. More about Larry Bird

Current items with a signature of Larry Bird

These are the most current items with a signature of Larry Bird that were listed on eBay and on other online stores - click here for more items.

Traded items with a signature of Larry Bird

If you're interested in Larry Bird Rookie cards you might want to take a look at our sister site that specializes in Basketball Rookie Cards only.

The most expensive item with a signature of Larry Bird (1986-87 LARRY BIRD CELTICS GAME-WORN JERSEY SHORTS SIGNED AUTO MEARS A10 PSA/DNA) was sold in November 2019 for $35000.00 while the cheapest item (Larry Bird Autographed Collectors Plaque - Guaranteed Authentic!) found a new owner for $0.01 in July 2013. The month with the most items sold (145) was February 2022 with an average selling price of $194.38 for an autographed item of Larry Bird. Sold items reached their highest average selling price in March 2011 with $450.00 and the month that saw the lowest prices with $0.99 was November 2010. In average, an autographed item from Larry Bird is worth $133.33.

Most recently, these items with a signature of Larry Bird were sold on eBay - click here for more items.

Larry Bird’s greatest clutch plays with the Boston Celtics (01/19/23): Infamous for ripping the heart out of opposing teams in key moments late in the game, the Hick From French Lick made a career out of his ability to live up to the moment.

The most unbelievable Larry Bird plays with the Boston Celtics (01/16/23): The Indiana State alum was known for his flashy play coupled with brutalizing trash talk that ripped the will to win from the hearts of his opponents.

The greatest Larry Bird stories ever told by NBA legends, and Boston’s Larry Leg (01/05/23): Hall of Fame Boston Celtics small forward Larry Joe Bird is the stuff of NBA legend for a reason.

On Larry Bird’s greatest game: ‘I should have quit right there’ (12/30/22): The backstory behind one of the most important games of Larry Bird's career.

What is it like playing sports as the younger brother of Boston Celtics legend L (12/28/22): Eddie Bird started his high school sports career in the long shadow of his older brother Larry, the Boston legend.

On this day: Legendary Boston forward Larry Bird born (12/2022): Larry Legend was born this day in a town not far from French Lick, Indiana in 1956.

Boston Celtics icon Larry Bird was an ELITE passer (09/2022): The Hick From French Lick was best known for his scoring, but Bird could find the open man like few have ever been able to.

Best of Boston Celtics legend Larry Bird’s passing and assists: Part III (08/2022): Scratch that Celtics basketball itch with a watch of the third clip in the series.

These Are Not Larry Bird’s Celtics. And That’s Just Fine. (06/2022): Trips down memory lane have grown harder as Celtics greats pass away. But the new generation is carving a memorable path of its own.

Pop: Jokic is 'like a reincarnation of Larry Bird' (08/2020): Denver rookie Michael Porter Jr. remained red hot at the NBA restart with 30 points and 15 rebounds in the Nuggets' win over the Spurs Wednesday.

From legendary Larry Bird to modern marvel Stephen Curry, five 3-point shooters (06/2020): The 3-ball wouldn't be as prevalent in the NBA today without the contributions of these pioneers of long-distance shooting

Marcus Smart breaks Celtics' record with 11 made 3-pointers, but that's not even (01/2020): That Smart holds a 3-point shooting mark over the likes of Larry Bird, Ray Allen and Paul Pierce is pretty crazy

Edwards' 3s in the 3rd send Celtics to perfect preseason (10/2019): From Larry Bird to Ray Allen, the Boston Celtics have suited up some of the best perimeter shooters in NBA history.

Larry Bird finds Florida house a tough sell (04/2015): The basketball legend's Naples, Fla., house has been on the market for nearly two years. The price was dropped this week.

ISU's Larry Bird statue No. 2 on NCAA list (01/2015): TERRE HAUTE, Ind. (AP) - Indiana State University and Larry Bird once again finished second. But in a listing of the top five college basketball statues by the NCAA, this time they finished ahead of Magic Johnson and Michigan State University. In a short video segment called, "High Five Counts ...

Pacers owner OKs trade for Lance Stephenson if Larry Bird wants to do it (12/2014): Hornets reportedly trying to shop Stephenson to Indiana, where he began his NBA career

Nick Young says he's a better 3-point shooter than Larry Bird (11/2014): Nick "Swaggy P" Young is never short on confidence. On Tuesday night, he made his season debut following a thumb injury that kept him out the Lakers' first ten games of the season, and the team promptly won for just the second time all year.

Suns Mix Up Larry Bird, Rajon Rondo In Hilariously Incorrect Graphic (10/2014): The people who find the statistics for television graphics during sporting events have to work...

Larry Bird built flawed Pacers and now must right ship (05/2014): Pacers coach Frank Vogel's job is safe, but this offseason has plenty of questions ahead.

Larry Bird did not look too thrilled while watching the Indiana Pacers collapse (04/2014): Congratulations! Your weather is set to . You can change the location at any time. Don't have an account?

The backstory: The Larry Bird cover (03/2014): MARCIA STAUB (Murphy) was one of two ISU Sparkettes who were part of the famous Sports Illustrated cover with Larry Bird. Staub (at right) and fellow Sparkette Sharon Senefeld (Ilkin) joined Bird for the shoot at a Chicago photography studio.

Larry Bird warns Pacers about turnovers (01/2014): The Indiana Pacers - leading the race for the No. 1 seed in the Eastern Conference and emerging as a showcase team in the league - still have flaws. This observation according to Larry Bird, the team's president of basketball operations.

LeBron James Named AP Male Athlete Of The Year, Passes Larry Bird In Scoring (12/2013): The NBA Playoffs don't begin until the end of April 2014, but if the current achievements of LeBron James are any implication of the Miami Heat's success, then teams better start battling for the chance to come in second place.

Inside Larry Bird's Naples, FL Mansion (09/2013): NBA legend Larry Bird is sure living it up down there in Florida. Just take a look at his Naples, FL mansion... that he's recently placed on the market for $4.8 million.

Bob Kravitz: Larry Bird will provide the Pacers with a single voice (06/2013): More than anything, the Indiana Pacers needed one voice. A year ago, they had Larry Bird's fading voice leading the draft as he walked out the door.

Pacers Insider: Larry Bird pops up and praises the team he helped build (05/2013): The last time I got a text from from Larry Bird at 1 a.m. it was about this time a year ago. It first started with a telephone call talking about how poor the Pacers played in their 32-point loss to the Miami Heat in Game 5.

Reno phone outage, allegation against Larry Bird's son among Tuesday's top-read (02/2013): This booking photo provided by the Monroe County Sheriff's Office on Tuesday, Feb. 12, 2013, shows Conner Anthony Bird, who was arrested after police said he tried to run over his ex-girlfriend with a car.

New Seattle Franchise May Target Phil Jackson and Larry Bird (01/2013): With the sale of the Sacramento Kings to a Seattle group well underway, the born-again Sonics are said to be interested in some some heavy-hitters to fill out their front office roster.

Larry Bird: Rare, classic photographs (12/2012): Larry Bird celebrates his 56th birthday on Friday. From his days at Indiana State to Boston to his return home to coach the Pacers, here’s a look back at the career of Larry Legend.

Martelli on Creighton’s McDermott 'The kid is Larry Bird' (11/2012): St. Joseph’s coach Phil Martelli had the highest of praise for a player he hopes the Hawks are able to contain on Saturday – Creighton 6-foot-8 junior Doug McDermott.

ISU to erect Larry Bird statue (08/2012): A basketball legend from Indiana State University will be honored in bronze.       A 15-foot bronze statue of Larry Bird is being prepared to stand outside ISU's Hulman Center.

Dan Patrick Dressed as Larry Bird for Grown Ups 2 (07/2012): Grown Ups 2 will be full of pointless cameos attempting to distract from a lack of script.

Time to decide Larry Bird's future with Pacers (05/2012): The future is bright. He's still passionate about his job. And Larry Bird had a drama-free team. Now all the Indiana Pacers president needs to do is make sure he and team owner Herb Simon are on the same page before deciding if he will return next season.

Report: Larry Bird to leave Pacers (04/2012): CBS Sports is reporting that Bird has told Pacers owner Herb Simon to plan for his departure after the season.

Burger Bytes: Larry Bird's Letter. Yes, THAT Larry Bird. (01/2012): COURTLAND, Ala. -- Larry Bird was truly a rock star in the NBA; a Boston Celtics legend and now president of the Indiana Pacers.

NBA fix: Larry Bird's final 50-point game (11/2011): Larry Bird was in the twilight of his career on this date in 1989. His age matched his uniform number of 33, and he was down to his final three seasons. But he still had one last monster game in him.

Erin Andrews Interview: ESPN Sideline Reporter Talks Larry Bird, Role Models And (09/2011): Yes, Erin Andrews is a sports fan. So, please, stop asking. If there is a football game happening somewhere right now then she's probably watching it. Well, if it's a big enough college game then she is likely reporting from the sidelines.

Will Reggie Miller Replace Larry Bird as Pacers President? (08/2011): Larry Bird’s days in the Indiana Pacers’ front-office are numbered , and as team owner Herb Simon looks around for a replacement, one name seems to be showing up over all others.

NBA AM: Last Run For Larry Bird? (06/2011): Pacers' President Larry Bird says its about time to call it a career... The Maloofs love their Jimmer... Hard to agree with the Players perspective... NBA Chats at 2pm and...

Larry Bird Will Be Playing In The NBA Finals Tonight (05/2011): Dirk Nowitzki has the Dallas Mavericks back in the NBA Finals for the second time in his career. If he can finally win his first ring, he might finally be considered worthy of discussion as one of the best players of all-time.

Larry Bird watch is on (04/2011): There was some uncertainty heading into the weekend about Larry Bird's continued stewardship of the Pacers, but...

NBA AM: Larry Bird's Last Stand? (01/2011): Pacers' president Larry Bird's contract expires this summer and he hopes to trigger a few deals before he's done... The Pistons may have a buyer, again... Hornets locked into ...