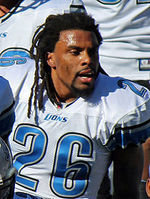 Louis Delmas (born April 12, 1987) is a former American football safety. He was drafted by the Detroit Lions in the second round of the 2009 NFL Draft. He played college football at Western Michigan. He was also a member of the Miami Dolphins. More about Louis Delmas

Current items with a signature of Louis Delmas

These are the most current items with a signature of Louis Delmas that were listed on eBay and on other online stores - click here for more items.

Traded items with a signature of Louis Delmas

The most expensive item with a signature of Louis Delmas (Louis Delmas Miami Dolphins Autographed Full Size Helmet With COA) was sold in January 2018 for $125.00 while the cheapest item (Louis Delmas 2009 SP Authentic #341 Rookie Autograph 189/799) found a new owner for $0.99 in March 2022. The month with the most items sold (9) was January 2012 with an average selling price of $15.00 for an autographed item of Louis Delmas. Sold items reached their highest average selling price in January 2018 with $125.00 and the month that saw the lowest prices with $0.99 was March 2022. In average, an autographed item from Louis Delmas is worth $19.99.

Most recently, these items with a signature of Louis Delmas were sold on eBay - click here for more items.

Jimmy Wilson and Walt Aikens leading candidates to replace Louis Delmas (12/08/14): The Miami Dolphins coaches have a riddle to solve when it comes to replacing Louis Delmas, who suffered a season-ending ACL injury in Sunday's 28-13 loss to the Baltimore Ravens.

Jimmy Wilson and Walt Aikens leading candidates to replace Louis Delmas (12/2014): The Miami Dolphins coaches have a riddle to solve when it comes to replacing Louis Delmas, who suffered a season-ending ACL injury in Sunday's 28-13 loss to the Baltimore Ravens.

Louis Delmas doesn't resent Detroit Lions for cutting him (11/2014): Louis Delmas played in all 16 games for the Detroit Lions last season. He soldiered through chronic knee pain to turn in one of his more productive seasons. Detroit cut him anyway.

Dolphins starting safety Louis Delmas is nursing a calf issue (09/2014): DAVIE - The mystery surrounding Louis Delmas' recent demotion from his starting role, and his limited participation in this week's practices has been solved

Dolphins comfortable with Louis Delmas' knee situation (03/2014): ORLANDO — By the end of his five seasons in Detroit, the Lions were frustrated about safety Louis Delmas’ inability to practice more than once a week and thought that it was a contributing factor to his struggles in games.

DETROIT LIONS: Louis Delmas sends gator to zoo to accommodate Kevin Ogletree (10/2013): ALLEN PARK — Louis Delmas and Kevin Ogletree have been friends for eight years — since they matched up against each other in college — Delmas at Western Michigan and Ogletree at Virginia.

Louis Delmas, Lions mascot have perfected their roar (09/2013): Early candidate for best NFL photo of the year. The pose, the timing. This is what gets you the Pulitzer. ... It isn't? Oh. Well, it's still a cool picture. Way to go, everyone. (h/t Pride of Detroit )

Detroit Lions S Louis Delmas says despite knee injuries, he'll never change his (06/2013): The lingering knee issues of Detroit Lions safety Louis Delmasmay have altered the structure of his contract, but it will never alter his playing style.

Detroit Lions S Louis Delmas absent from OTAs as he rehabilitates (05/2013): Detroit Lions safety Louis Delmas was not at organized team activities (OTAs) on Wednesday, while running back Mikel Leshoure did not participate due to an undisclosed injury.

Detroit Lions excited about safety pairing of Glover Quin and Louis Delmas (03/2013): If the pair can stay healthy, they give the Lions a versatile duo in the back end of the defense that will limit the mismatches opposing offenses can create.

MLive readers believe Detroit Lions will focus on retaining Chris Houston, Louis (02/2013): On Friday, general manager Martin Mayhew said the Lions are focused on retaining nine of the team's 23 unrestricted free agents. We asked you to predict who those nine players.

Louis Delmas-mentored Jonathan Cyprien wears swagger well at Senior Bowl (01/2013): He made his presence felt when he put one of the week's biggest hits on UCLA running back Johnathan Franklin, and then immediately fired some trash talk in Franklin's direction.

Lions' Jeff Backus, Louis Delmas closer to game-ready (11/2012): Safety Louis Delmas (knee), who was unable to finish the game last Thursday, was back on the field for the first time. He stretched with the team, then spent some time doing additional stretches with a trainer.