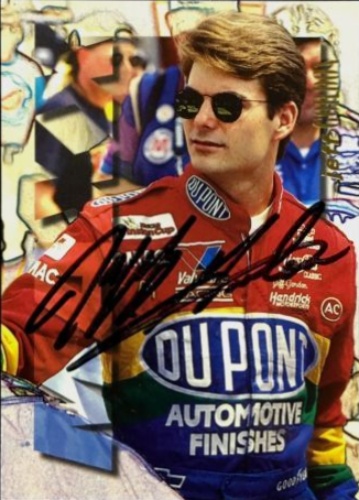 Current items with a signature of Jeff Gordon

These are the most current items with a signature of Jeff Gordon that were listed on eBay and on other online stores - click here for more items.

Traded items with a signature of Jeff Gordon

The most expensive item with a signature of Jeff Gordon (Genuine Jeff Gordon Race Used Gas Can 1995 Atlanta Autographed Nascar DuPont) was sold in October 2016 for $9999.99 while the cheapest item (Worn Vintage Embroidered Nascar Dupont #24 Autographed Jeff Gordon Hat) found a new owner for $0.01 in August 2017. The month with the most items sold (64) was June 2022 with an average selling price of $21.25 for an autographed item of Jeff Gordon. Sold items reached their highest average selling price in March 2016 with $265.12 and the month that saw the lowest prices with $3.89 was September 2010. In average, an autographed item from Jeff Gordon is worth $25.43.

Most recently, these items with a signature of Jeff Gordon were sold on eBay - click here for more items.

Sovereign Lake already busy (12/07/18): It was the best of both Okanagan worlds last weekend.

Axalta, Penn State and Jeff Gordon Partner to Drive Home the Importance of STEM (03/2015): Axalta Coating Systems, a leading global manufacturer of liquid and powder coatings, and Penn State today jointly announced a partnership that will include an on-campus press event and special learning opportunities with Jeff Gordon and his team at Pocono Raceway.

Jeff Gordon takes a final spin at track that meant so much (02/2015): HAMPTON, Ga. (AP) — Jeff Gordon admired his latest retirement gift — a miniature race car for his two young children — and thanked the folks at Atlanta Motor Speedway for not going with the obvious choice.

Jeff Gordon's Christmas Was Awesome (12/2014): Can anyone beat getting a steering wheel from a Formula One car they've driven as a present? Probably not, unless someone got the full F1 car with it somewhere. Read more...

World Cup: USA vs. Belgium means NASCAR's Jeff Gordon vs. wife (06/2014): Jeff Gordon will have to deal with a divided household this afternoon when the United States soccer team faces Belgium in the World Cup.

'Cabbie' Jeff Gordon Turns Tables on Terrified Writer in Pepsi Ad Sequel (02/2014): When NASCAR legend Jeff Gordon pranked a car salesman and pretended to take a car on a super-charged test drive for a Pepsi commercial, the video went viral. But not everyone was impressed. Travis Okulski, a car enthusiast and writer for the blog Jalopnik, went...

Jeff Gordon might retire after this upcoming season (01/2014): Could four-time Cup series champion Jeff Gordon step away from full-time competition after the 2014 season?

NASCAR Legend Jeff Gordon Stops By The Couch (12/2013): NASCAR legend Jeff Gordon is revving up for another season behind the wheel and making a run at another championship. He's also spreading the word about a major health concern, especially for parents with young children.

Jeff Gordon will be in attack mode to make Chase (07/2013): Jeff Gordon knows he's got six races to make a big push to qualify for this year's Chase for the Championship. That's why he's in attack mode.

Video Interlude: Jeff Gordon's 15 CPW Apartment Gets Ominous Listing Video (05/2013): Nascar superstar Jeff Gordon's $30 million 15 Central Park West pad has been on the market for over two weeks now, so the brokers just decided that it was time to up the ante with this listing video. Really,...

NASCAR: Jeff Gordon and Wife Ingrid Open Up About Their Marriage (03/2013): NASCAR superstar Jeff Gordon 's wife Ingrid Vandebosch admits being married to the racing champion has its challenges. "It got harder when we had children," Ingrid said during...

NASCAR Commentary: Jeff Gordon too smart for this Daytona 500 field (02/2013): Danica Patrick is the sentimental choice. Her car-owner and teammate, Tony Stewart, is the overwhelming favorite. But neither will win today's Daytona 500.

Countdown to Daytona: Jeff Gordon Still Eyeing 5th Title (01/2013): Charlotte - Jeff Gordon is a four-time Cup champion, but his last title came 12 years ago way back in 2001. Could this be the year he's able to land that elusive fifth championship?

Want to buy Jeff Gordon’s used RV? There’s an eBay auction for that (12/2012): While most of us will probably never drive in a NASCAR race, a unique eBay auction this week might have given you the opportunity to own a motor home that once belonged to one of the best NASCAR drivers of all-time. The auction offered a 2002 Prevost H3 Marathon Coach that was once owned by…

Jeff Gordon and Clint Bowyer still not on speaking terms (11/2012): Not even the party atmosphere in Las Vegas can cut the tension between Jeff Gordon and

Dustin Long: Jeff Gordon thinks Brad Keselowski will contend with Johnson, Hamli (10/2012): CHARLOTTE, N.C. -- A sense of inevitability, something common in serialized horror movies, currently pervades NASCAR's title Chase. While the characters are ever changing, the antagonist remains to inflict his will sequel after sequel.

Atlanta could be last hope for Jeff Gordon, Carl Edwards (08/2012): Both drivers have history of success at this 1.5-mile oval, but night conditions and bumpy surface could make for wild ride to wild card.

Jeff Gordon laments missed opportunity at Brickyard (07/2012): Jeff Gordon's fifth-place finish at one of his favorite tracks wasn't a pick-me-up.

Jeff Gordon is sixth racer to get a highway named after him in Charlotte (05/2012): Four-time NASCAR champion Jeff Gordon has become the sixth stock-car racer to have a section of North Carolina public highways named in his honor. On Friday, the N.C. Department of Transportation dedicated a 1.

Engine woes plague Jeff Gordon, others in Kansas race (04/2012): Hendrick Motorsports driver takes a hit in the point standings after losing horsepower late in a race that was hard on many motors

Kyle Busch Edges Tony Stewart To Win Shootout In Daytona After Jeff Gordon Crash (02/2012): DAYTONA BEACH, Fla. -- The pack is back. And so is the Big One.

At Edge Of 40, Jeff Gordon Looking For Another Brickyard Win (07/2011): — It's enough to make NASCAR fans do a double-take, but driver Jeff Gordon — the onetime "Wonder Boy" of stock-car racing — turns 40 next week.

'Next Jeff Gordon' still races original (05/2011): A young driver burst onto the NASCAR scene and made winning races and championships look easy.

Jeff Gordon crawls to 70th pole (04/2011): Jeff Gordon won his 70th career pole Saturday and led a Hendrick Motorsports sweep of the top four spots at Talladega Superspeedway -- only the third team in NASCAR history to monopolize the first two rows for a Cup race.

Jeff Gordon leads NASCAR in TV time for sponsor (03/2011): BRISTOL, Tenn. - A recent study shows that Jeff Gordon has generated more television time for his sponsor than any other NASCAR driver through three races this season.

Jeff Gordon wins the NASCAR Sprint Cup race at Phoenix International Raceway (02/2011): It was the first pinch-me moment Jeff Gordon's had at the track in a long time. Sixty-six races, to be exact. Gordon raced like the Gordon of old on Sunday, winning the Subway Fresh Fit 500 at Phoenix.

Jeff Gordon, McMurray - NASCAR Daytona test teleconference (01/2011): THE MODERATOR: Jeff, new pavement. What do you think? JEFF GORDON: It's great. We were here in December doing the Goodyear tire test as well, so had a pretty good indication of what we had to deal with when we got here.