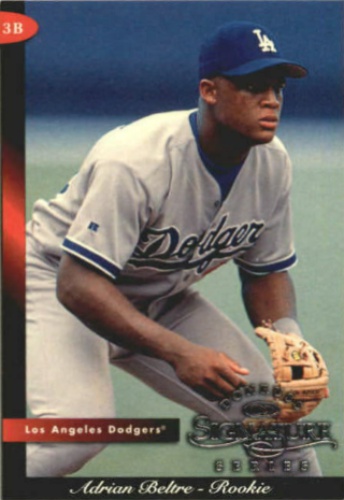 Adrián Beltré Pérez (born April 7, 1979) is a Dominican former professional baseball third baseman. During his career, Beltré played for the Los Angeles Dodgers, Seattle Mariners, Boston Red Sox, and Texas Rangers in Major League Baseball. He is regarded as one of the greatest third basemen of all time. More about Adrian Beltre

Current items with a signature of Adrian Beltre

These are the most current items with a signature of Adrian Beltre that were listed on eBay and on other online stores - click here for more items.

Traded items with a signature of Adrian Beltre

If you're interested in Adrian Beltre Rookie cards you might want to take a look at our sister site that specializes in Baseball Rookie Cards only.

Most recently, these items with a signature of Adrian Beltre were sold on eBay - click here for more items.

Adrian Beltre was so confident, he didn't wear a cup (03/24/20): Playing third base in the majors and not wearing a cup seems like a bad idea. But Adrian Beltre, a future Hall of Famer, believed his defense was good enough to save him.

Daily Red Sox Links: Matt Barnes, Adrian Beltre, David Ortiz (02/06/19): In today’s links, we get some new takes on the offseason, Matt Barnes is about to get a promotion and David Ortiz make a real estate decision.

We know the Rangers are retiring Adrian Beltre's number. Now we know when. (02/06/19): The club will hold a on-field ceremony June 8 before the Rangers play the Oakland Athletics at Globe Life Park in Arlington.

Adrian Beltre wants to finish his career with the Rangers (02/2015): A 17-year veteran is afforded the opportunity to arrive to spring training on report date, but Adrian Beltre beat the deadline for Texas Rangers position players by three days. Promote to Mobile 0 read more

Adrian Beltre hates having his head touched, but made the mistake of hitting a w (09/2014): It's the price you pay for greatness.

Adrian Beltre has found his stride in big month of June (06/2014): Ron Washington said the ability to use the whole field has helped Adrian Beltre is bat .400 with 13 multi-hit games in June.

Watch: Miguel Cabrera messes with Texas 3B Adrian Beltre (05/2014): Miguel Cabrera knew just what to do when he got to third base against the Texas Rangers on Friday night.

Rangers activate Adrian Beltre from the disabled list (04/2014): The Rangers get Adrian Beltre back and lose the hot-hitting Kevin Kouzmanoff. They'll take that trade-off.

Adrian Beltre likes upgrades to Rangers’ offense (01/2014): “On paper it looks better,” said Beltre, who was honored as the Rangers’ Player of the Year at Friday’s Awards Banquet. “We all have to, as a team, get out there and do our job and try to win ballgames. 0 0 read more

Player Profile: Adrian Beltre (12/2013): Eddie Middlebrook takes a look at the Rangers' most productive player over the past three seasons and a near Hall of Fame lock, Adrian Beltre.

Rangers taking advantage when Adrian Beltre walks (08/2013): Opponents are giving the third baseman MVP treatment, but the strategy has backfired.

Adrian Beltre delivers Rangers' third straight walk-off win (07/2013): ARLINGTON, Texas - Adrian Beltre tossed off his batting helmet, covered his head with both hands and jumped into the middle of what has been a common scene this week for the Texas Rangers.

Adrian Beltre Shrugs Off Gagne's PED Claims (09/2012): Adrian Beltre, who played with Eric Gagne from 1999-2004 as a member of the Dodgers, doesn't give much credence to Gagne's claim that around 80 percent of the players on those teams used PEDs. Photo Credit: Getty Images

Rangers’ Adrian Beltre Plays Third Base Like No One Else (08/2012): Adrian Beltre hits for power and average, but the way he plays third base makes him one of the most underappreciated performers in baseball.

Adrian Beltre worth the price to Texas Rangers (10/2011): When Adrian Beltre slugged the Rangers into the American League Championship Series and himself into baseball lore Tuesday, he validated the franchise's $80 million winter commitment to him.

Moving on up: Adrian Beltre (09/2011): New Third Baseman Adrian Beltre is putting together a very strong season for the Rangers. But even after seeing him spend five years struggling in Seattle, it should come as no surprise that Beltre's mashing.

John Rhadigan: Adrian Beltre great in both the field and the clubhouse (05/2011): Texas Rangers announcer John Rhadigan chatted with fans on Tuesday and answered questions about the club. Here are some highlights: