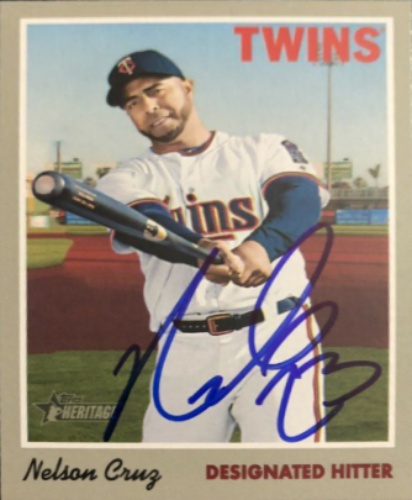 Current items with a signature of Nelson Cruz

These are the most current items with a signature of Nelson Cruz that were listed on eBay and on other online stores - click here for more items.

Traded items with a signature of Nelson Cruz

If you're interested in Nelson Cruz Rookie cards you might want to take a look at our sister site that specializes in Baseball Rookie Cards only.

The most expensive item with a signature of Nelson Cruz (NELSON CRUZ Autographed Signed Louisville Slugger Game Issued/ Used Bat JSA) was sold in January 2022 for $850.00 while the cheapest item (2012 Nelson Cruz gypsy Queen moonshots Is signed card) found a new owner for $0.99 in November 2022. The month with the most items sold (59) was October 2011 with an average selling price of $19.50 for an autographed item of Nelson Cruz. Sold items reached their highest average selling price in December 2018 with $224.99 and the month that saw the lowest prices with $0.99 was March 2010. In average, an autographed item from Nelson Cruz is worth $19.99.

Most recently, these items with a signature of Nelson Cruz were sold on eBay - click here for more items.

Nationals' Nelson Cruz, 42, hints at wanting to return for 2023 MLB season (10/03/22): Cruz has had a tough season in Washington, but he doesn't seem quite ready to call it a career

LOOK: Nelson Cruz shows off custom cleats celebrating Earth Day, shoes will be a (04/22/22): April 22 is Earth Day and Cruz is celebrating with custom kicks

Juan Soto helped recruit Nelson Cruz, who fills multiple roles for Nationals (03/17/22): Nelson Cruz was a significant addition for the Nationals both for his bat and his reputation as a clubhouse leader.

Nelson Cruz signing makes Nationals scarier in NL East (03/14/22): Pitching around Juan Soto won't be such an easy decision in 2022.

MLB roundtable: Which team should trade for Nelson Cruz if the Twins are trade d (06/2021): The last place Twins figure to be active sellers at the trade deadline

MLB Star Power Index: Lucas Sims, Nelson Cruz and Kent Emanuel stick it to the m (04/2021): It's once again time for whatever this is

Back with Twins, retirement not on Cruz's mind (02/2021): After re-upping with the Minnesota Twins for what will be his 17th major league season, Nelson Cruz clearly was not ready to entertain the idea of a farewell tour.

Age is just a number: Over-30 MLB free agents teams shouldn't be afraid to sign (12/2020): No matter how many birthdays players like Nelson Cruz have celebrated, they can be assets for teams looking to win now.

MLB Star Power Index: In praise of Nelson Cruz and the Twins' sacred home run ro (09/2020): Who's dominating the conversation in MLB this week? Let's have a belabored and possibly tortured look

Nelson Cruz and the incredible gifts he's bestowed on his Dominican hometown (06/2020): First he delivered a firetruck. Then an ambulance and medical care and baseball gear and supplies. Nelson Cruz, a finalist for the Muhammad Ali Sports Humanitarian Award at The ESPYS, has made giving a way of life.

Fantasy baseball: Veterans you can bag at a discount (02/2020): Eric Karabell gets back on the soapbox, arguing in favor of drafting proven veterans like Nelson Cruz for your fantasy baseball teams, rather than running the risk of relying on rookies.

2019 Fantasy Baseball: Nelson Cruz to the Twins | TheFantasyFix.com (01/2019): The Minnesota Twins sign free agent Nelson Cruz to a one-year deal worth $14.3 million. The Twins bolster their offense as they aim to return to the playoffs after their somewhat surprising trip there in 2017. In arguably the weakest division in baseball, where the standout Cleveland Indians are fav

Agent Bryce Dixon Talks Nelson Cruz (12/2018): What is Nelson Cruz looking for in free agency? An exclusive interview with his agent.

With Nelson Cruz gone, Orioles designated for flexibility (04/2015): Quiz him about his team's versatility, and Orioles manager Buck Showalter quickly rattles off the names of players on his potential 25-man roster who can play multiple positions adequately.

Nelson Cruz takes well-worn path to Mariners (12/2014): Newest Mariner has used his work ethic to battle through eight seasons in the minors in the Dominican Republic and the United States and 10 more in the majors to become a power-hitting all-star.

Orioles' Nelson Cruz says he didn't expect 40 home runs this year (09/2014): NEW YORK -- Nelson Cruz said Wednesday that he didn’t expect to hit 40 home runs before the season began, adding that staying healthy has been the key to having a career year at age 34.

Fans set aside Biogenesis scandal, make Orioles’ Nelson Cruz an all-star (07/2014): Orioles fans showed their support for Nelson Cruz by voting him into the All-Star Game in spite of his past.

Orioles notes: MLB's transfer rule is changing, Nelson Cruz, cameras (04/2014): The dubious interpretation of the transfer rule -- possibly the biggest controversy that has come out of baseball's new replay system -- will be changed starting Friday, according to a Fox report.

Nelson Cruz says 'I want to be in the fire right away' (02/2014): Nelson Cruz will see game action with the Orioles for the first time Thursday. He's hitting ninth because Orioles manager Buck Showater wrote the lineups for the intrasquad game in reverse alphabetical order.

At any price, Nelson Cruz makes no sense for Tigers (01/2014): Cruz, the former Texas Rangers slugger, might not actually make the Tigers better, because he's become just such a one-dimensional player who now finds himself out of step with the rest of the Tigers roster.

Nelson Cruz leaving a ‘lot of good memories’ for Rangers (12/2013): The addition of Shin-Soo Choo signals the end of the slugger’s time with Texas.

Nelson Cruz rumors: Free-agent OF seeking 4-year, $75 million contract (11/2013): Cruz has already been linked to several clubs this winter--including the Seattle Mariners , New York Mets , Oakland thletics and New York Rangers --but it's unclear how much each team is willing to dole out for a 33-year-old outfielder coming off a drug suspension.

Nelson Cruz apologizes for suspension, could join Rangers in playoffs (08/2013): Loading... "I want to apologize to the fans, the Texas Rangers organization and all of Major League Baseball for the mistake I made," Cruz said, via MLB.com . "I apologize to my family. There have been a lot of people and fans behind me.

Grant: Why Nelson Cruz is more like the Texas weather than any other Ranger (05/2013): Click here to read Evan Grant's entire column

Nelson Cruz returns to Texas Rangers lineup, will play in WBC (03/2013): Thursday night was a scary one for Nelson Cruz , who felt pressure in his chest and went to an area h

Attorneys deny Nelson Cruz connected with drug clinic (01/2013): The report of the right fielder's involvement with PEDs is false, they say.

Nelson Cruz' homer lifts Rangers over Blue Jays (08/2012): TORONTO - The Texas Rangers felt confident their bullpen would bail them out.

Texas Rangers and Nelson Cruz agree to contract (02/2012): Nelson Cruz seems to be a perfect fit for the Texas Rangers with his potent bat and big personality. With hopes of staying together even longer, A.L. championship series MVP Cruz and two-time defending A.L. champion Texas avoided arbitration by agreeing Thursday to a $16 million, two-year contract.

Nelson Cruz' journey to the majors was walked with family (10/2011): In the Dominican Republic, baseball isn't just a game; it's practically a religion. The impoverished country is the birthplace of Texas Rangers' outfielder Nelson Cruz. News 8 visited the house Cruz grew up in and met the slugger's family.

Nelson Cruz drives in career-high eight runs in blowout win over Blue Jays (07/2011): Nelson Cruz busted out of his recent slump in grand fashion last night, driving in a career-high eight runs in a 12-2 rout over the Blue Jays. Cruz went a perfect 4-for-4 on the night. He had an RBI double in the bottom of the second inning, slugged a three-run homer in the fourth and…

Oakland A's notebook: Texas Rangers bats plenty potent, even without Josh Hamilt (05/2011): Rangers are plenty potent without Hamilton, CruzKANSAS CITY, Mo. -- Josh Hamilton and Nelson Cruz are both injured, so neither will be in the Texas Rangers' lineup during their three-game series with the A's.

Baseball: Texas Rangers' Nelson Cruz has homers in first four games (04/2011): The right fielder joins Willie Mays and Mark McGwire as the only major leaguers to hit a homer in each of their first four games of a season