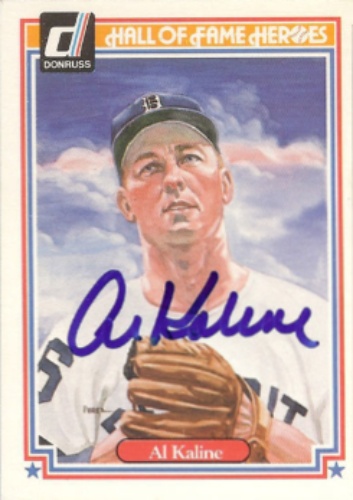 Albert William Kaline (/ˈkeɪlaɪn/ KAY-line; December 19, 1934 – April 6, 2020), nicknamed "Mr. Tiger", was an American professional baseball right fielder who played 22 seasons in Major League Baseball (MLB) for the Detroit Tigers. For most of his career, Kaline played in the outfield, mainly as a right fielder where he won ten Gold Glove Awards and was known for his strong throwing arm. He was selected to 18 All-Star Games, including selections each year between 1955 and 1967. He was elected to the Baseball Hall of Fame in 1980, his first time on the ballot. More about Al Kaline

Current items with a signature of Al Kaline

These are the most current items with a signature of Al Kaline that were listed on eBay and on other online stores - click here for more items.

Traded items with a signature of Al Kaline

If you're interested in Al Kaline Rookie cards you might want to take a look at our sister site that specializes in Baseball Rookie Cards only.

The most expensive item with a signature of Al Kaline (Al Kaline autographed professional model baseball bat c. 1966 Lot 194) was sold in November 2016 for $1700.00 while the cheapest item (AL KALINE SIGNED HALL OF FAME PLAQUE w/CERTIFICATE) found a new owner for $0.98 in February 2008. The month with the most items sold (342) was April 2020 with an average selling price of $39.99 for an autographed item of Al Kaline. Sold items reached their highest average selling price in August 2013 with $99.99 and the month that saw the lowest prices with $9.99 was February 2008. In average, an autographed item from Al Kaline is worth $33.73.

Most recently, these items with a signature of Al Kaline were sold on eBay - click here for more items.

Hall of Famer Bench to auction memorabilia (10/02/20): The recent deaths of baseball greats Lou Brock, Tom Seaver and Al Kaline got Johnny Bench thinking about the future and the prospect of unloading memorabilia from his Hall of Fame career.

Al Kaline Wondered if He Should Have Been a Doctor (04/11/20): The Hall of Fame outfielder, who died Monday, once wondered aloud to our columnist whether playing baseball was worthwhile.

Bryce Harper Rejected $300M, but Is He Really a Generational Superstar Anymore? (12/2018): Bryce Harper scuffled along, hitting .214 before the All-Star Game last summer, which led to the second-worst average of his career (.249). He did not finish among the top 19 in National League Most Valuable Player voting...

Tigers Hall of Famer Al Kaline returns to Baltimore for ALDS (10/2014): Every time the Detroit Tigers travel to Baltimore, Al Kaline, one of both the franchise’s and the city of Baltimore’s most famous sons, makes the trip with them.

In Jerry Lumpe, Al Kaline remembers fondly a great Tigers teammate, great friend (08/2014): With all due respect to the great Derek Jeter, this is a story about a Yankees player who was dying. Not retiring. And about the Tigers great who was his friend.

Wednesday sports stories you may have missed: Tigers legend Al Kaline comes to F (08/2013): Don’t have an account? Congratulations! Your weather is set to . You can change the location at any time. Want to set your local edition?

Al Kaline recalls humble start to big-league career 60 years ago (06/2013): To get dressed for his first game as a Tiger, Al Kaline didn't have a locker. He had a nail. A nail on the door of the bathroom. It was'53 -- 60 years ago Tuesday night.

Detroit Tigers honor 1968 World Series championship team; Al Kaline: 'It seems l (05/2013): Al Kaline, Denny McLain and Mickey Lolich were among a group of 1968 Tigers players who were honored prior to the game.

By The Numbers: Al Kaline Was The Ultimate Pro’s Pro (04/2013): Kaline never played a day of minor league baseball. He wore the Tigers’ uniform with class. He was the perfect No. 3 hitter, and quite possibly the best fielding right-fielder that many baseball fans ever saw.

Detroit Tigers legend Al Kaline among Hall of Famers happy to see Barry Bonds, R (01/2013): Al Kaline, Goose Gossage, Dennis Eckersley and others are in no rush to open the door to Cooperstown for anyone linked to steroids.

Steve Schrader: Al Kaline explains what Tigers need to improve (11/2012): Looking for postapocalyptic World Series answers, Tigers fans? Like, what's wrong with them? Who better to seek out than Mr. Tiger? Al Kaline, the team's special assistant to the president, offered his insight Monday on WJR's "The Frank Beckmann Show."

Tigers great Al Kaline to throw first pitch in Game 3 of World Series tonight (10/2012): The Tigers are pulling out the big guns for Game 3 of the World Series.

Jeff Seidel: It's my first day, and even Al Kaline can relate (06/2012): First day on the new job, and I see Al Kaline sitting in the video room at Comerica Park. "What do you remember about your first day in the big leagues?" I ask. His face lights up from the memory.

After 2011 banner raised, Al Kaline rises to occasion (04/2012): The Tigers started the season with a ceremony that had a little bit of everything -- a new championship banner, some telling cheers, not to mention a noticeable jeer, and it was all capped off by a legend.

Cal Lord: Meeting Tigers great Al Kaline shows how expectations differ from real (08/2011): It was only when Peter introduced him that I suddenly realized how special the moment had become. The man extending his hand to me was a living legend. Al Kaline. Mr. Tiger. For the last 60 years he has been an icon in Detroit sports history.