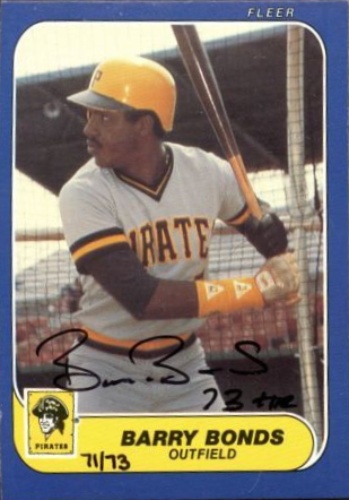 Barry Lamar Bonds (born July 24, 1964) is an American former professional baseball left fielder who played 22 seasons in Major League Baseball (MLB). Bonds was a member of the Pittsburgh Pirates from 1986 to 1992 and the San Francisco Giants from 1993 to 2007. He is considered to be one of the greatest baseball players of all time. More about Barry Bonds

Current items with a signature of Barry Bonds

These are the most current items with a signature of Barry Bonds that were listed on eBay and on other online stores - click here for more items.

Traded items with a signature of Barry Bonds

If you're interested in Barry Bonds Rookie cards you might want to take a look at our sister site that specializes in Baseball Rookie Cards only.

Most recently, these items with a signature of Barry Bonds were sold on eBay - click here for more items.

Ortiz on Bonds: 'To me, that guy is a Hall of Famer' (01/26/22): The logic of getting to Cooperstown remains murky, even to overjoyed electees. David Ortiz made it very clear what he thought about Barry Bonds' omission.

If Barry Bonds isn't a Hall of Famer by the end of the day, it's a failure by th (01/25/22): The Hall has one job: to tell the story of the sport. And nobody is a bigger part of that story than Barry Lamar Bonds.

Baseball Hall of Fame voting: David Ortiz will be close call when results are re (01/24/22): The BBWAA voting results will be revealed on Tuesday

Time may run out for Barry Bonds, but Hall of Fame will be worse off without bas (01/2022): One of the greatest players in the history of the game likely won't make the Baseball Hall of Fame in his final year on the ballot.

2021 Baseball Hall of Fame (01/2021): Will Barry Bonds or Rogers Clemens get into the hall on their ninth year on the ballot? Will any first-time nominees be inducted? We have you covered on this year's election to Cooperstown.

Barry Bonds clarifies 'death sentence' comment, says it was not aimed at MLB (03/2020): Bonds says he was referring to his Hall of Fame candidacy

Pedro Martinez: Barry Bonds, Roger Clemens should be in Hall of Fame (03/2015): The 2015 Hall of Famer says PED suspicion shouldn't keep two of the game's all-time greats from Cooperstown.

A-Rod To Home-Run King Barry Bonds: ‘I Want To Take Your Record’ (02/2015): The seven-time National League MVP is the home-run king, with 762 for his career. A-Rod is currently fifth on the list with 654, trailing Willie Mays, Babe Ruth and Hank Aaron.

Old-school Belichick risks being Barry Bonds in a headset (01/2015): Then New York Giants defensive coordinator Bill Belichick is carried off the field after their 1987 NFC Championship win over Washington. (SUSAN RAGAN/AP)

JAWS and the 2015 Hall of Fame ballot: Barry Bonds (12/2014): Arguably the greatest position player in baseball history, Barry Bonds' Hall of Fame hopes have been dented by his PED-tainted past and the intransigence of voters. But will this be his year?

Barry Bonds: I think I will get into Hall of Fame eventually (11/2014): © Christian Petersen/Getty Images The former Giants slugger thinks he'll be a Hall of Famer at some point. “I love Major League Baseball. I always have and I loved playing the game,” Bonds told MLB.com’s Barry M. Bloom. “I don’t have any doubts that I’ll get there in time.

Barry Bonds Feels ‘Sense Of Completion’ After Inclusion In 1st Giants World Seri (10/2014): Barry Bonds, the man who was once the center of the baseball world as he chased baseball's most sacred records in a Giants uniform is apparently all the way back from steroid purgatory, at least as far as the San Francisco Giants are concerned.

Barry Bonds Turns Into A Google Glass Fan: ‘I’m Glassing’ (09/2014): The former San Francisco slugger and home run king now counts himself among the fans of the controversial wearable device.

Game Of Jones: Are Barry Bonds, Roger Clemens Worthy Of Baseball HOF? (08/2014): It was a Role Play Thursday on The Adam Jones Show!

Reid column: Woodside's Degnan gets Barry Bonds treatment in PAL Ocean (05/2014): No one was on base in Woodside's half of the fourth inning Tuesday when Brad Degnan stepped to the plate to lead things off.

Kawakami: Barry Bonds returns to Giants so what? (02/2014): It seems like 70 years ago since Barry Bonds played for the San Francisco Giants.

Barry Bonds, Roger Clemens may have to wait a long time for Hall call (01/2014): Two players with gaudiest stats see percentages slip; others suspected of PED use have worse odds

You, too, Trebek? Even 'Jeopardy!' can't resist poking fun at Barry Bonds (12/2013): Baseball's home run king will always generate controversy, and now one of America's most popular TV quiz shows is getting in on the act.

Barry Bonds (09/2013): Barry Bonds is one of the greatest baseball players.

Commentary: Unfair to Bar Big Names Like Barry Bonds From Cooperstown (07/2013): Players on steroids should be included in Hall of Fame.

MLB Giants: New Barry Bonds plaque at AT&T Park (05/2013): A plaque commemorating Bonds' 756th home run had gone missing, but a new plaque has been bolted to the brick wall beyond the fence in right-center field.

New York Mets’ PR Director Is the ‘ Barry Bonds of Buttdialing’ (03/2013): Jay Horowitz is best known for being the longtime public relations director for the New York Mets. But he has a secret hobby that until now only those closest to him knew about: buttdialing. Read More

Barry Bonds' estate for sale: $25 million (01/2013): This week in celebrity real estate, Barry Bonds looks to unload his Los Angeles estate for $25 million and Ashton Kutcher's former bachelor pad is back on the market for $2.85 million.

No Hall passes expected for Barry Bonds, Roger Clemens or Sammy Sosa (11/2012): Baseball's all-time home run king and the most decorated pitcher likely will be shut out of the Hall of Fame in January.

Barry -- Bonds not Manilow -- makes secret Series visit (10/2012): Barry Bonds, at a cycyling event in August, made a quiet appearance at the World Series on Wednesday. / Ford McClave, U.S. Presswire SAN FRANCISCO -- They trotted out all of the San Francisco Giant legends.

Whoa! Barry Bonds slims down (07/2012): SPORTS BLOGGERS! Remember in late May when I told you someone on eBay was selling a very expensive bike that belonged to Barry Bonds ? Yeah, that was the same post where I told you Bonds is becoming something of a cycling freak.

COHN: Why I won't vote for Barry Bonds (06/2012): I am writing about Barry Bonds and why, at this time, I don't plan to vote for him for the Baseball Hall of Fame. It is not the first time I've written about this and it won't be the last.

Giants president says 'no plans' to hire Barry Bonds, but GM says it'll happen (05/2012): Monday Barry Bonds talked about how he wanted to join the Giants' organization and had talked to team president Larry Baer about the possibility. And while it'll likely happen at some point, don't expect Bonds to join the Giants anytime soon.

Barry Bonds gets to keep his baseball bats while on probation (02/2012): U.S. District Judge Susan Illston in San Francisco granted Barry Bonds an exception and said the former Giants slugger could hang onto his collection of bats.

Should Barry Bonds get a pass on Integrity & Character and be elected to the Hal (01/2012): Leaders should not get a pass on the issues of integrity and character. It's bad for the organization and for customers.

In Honor of Jim Leyland, Here’s 1991 Video Footage of the Then-Pirates Manager D (10/2011): It might have been 23, but audio briefly goes down during the video.

Barry Bonds prosecutors want verdict upheld (07/2011): Federal prosecutors urged a judge Wednesday to uphold Barry Bonds' conviction for obstruction of justice, arguing that the baseball star tried to mislead a grand jury with a rambling, nonresponsive answer to a question...

Judge Delays Decision On Perjury Retrial For Barry Bonds (06/2011): A federal judge in San Francisco a request Thursday to delay their decision on a possible perjury retrial for home-run champion Barry Bonds.

Barry Bonds With Family Suing Dodgers (05/2011): Once known for hitting 762 homeruns as one of the greatest sluggers in baseball history and then defamed for allegedly lying about juicing , the life and times of Barry Bonds (46) has certainly been one for the stage.

Fourth ex-big leaguer testifies he got injections from Barry Bonds' trainer (03/2011): Retired baseball player Randy Velarde, who last played for the Oakland As, testified Wednesday that he was injected with human growth hormone by Barry Bonds’ former personal trainer during a series of a parking lot meetings in 2002. Velarde was...

Judge: Players can testify at Barry Bonds case (01/2011): Baseball players who say they got steroids from Barry Bonds' weight trainer will be permitted to testify at the home run champion's upcoming perjury trial, a judge ruled Friday. At a hearing in U.S. District Court in...