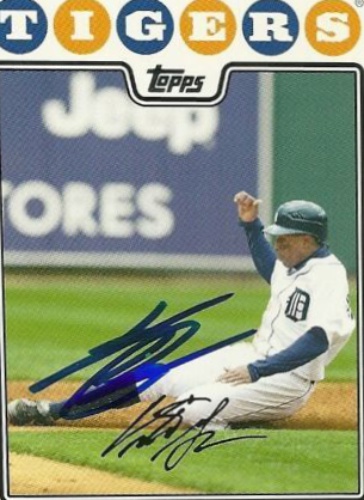 Current items with a signature of Curtis Granderson

These are the most current items with a signature of Curtis Granderson that were listed on eBay and on other online stores - click here for more items.

Traded items with a signature of Curtis Granderson

If you're interested in Curtis Granderson Rookie cards you might want to take a look at our sister site that specializes in Baseball Rookie Cards only.

Most recently, these items with a signature of Curtis Granderson were sold on eBay - click here for more items.

Curtis Granderson, 38, announces retirement from baseball after 16 seasons (01/31/20): The former Yankee and Met officially calls it a career after 16 years

Mets vs. Texas Rangers: Curtis Granderson is alright (04/2015): Jacob deGrom will start tonight for the Mets in the first of two exhibition games here against the Texas Rangers. Former Mets prospect Logan Verrett, who the Mets lost in the Rule 5 draft this winter to the Orioles and was then waived, will start for the Rangers.

WATCH: What the heck is Curtis Granderson doing on this Bryce Harper home run? (03/2015): Curtis Granderson was playing right field at the time for the Mets. He had no shot at the ball and knew it. But he still did something a little odd. And look who called him out on it.

Mets new hitting coach going back to 'Yankees blueprint' with Curtis Granderson (02/2015): The Mets have also considered starting the season with Granderson has their leadoff hitter.

Curtis Granderson and 9 more Mets new hitting coach Kevin Long could help (10/2014): His work with Curtis Granderson and the benefit the outfielder derived from it has been talked about many times already. But he won't be the only Mets hitter that could be helped by Long.

Mets may move Curtis Granderson to left field next season (09/2014): Congratulations! Your weather is set to . You can change the location at any time. Don't have an account?

Curtis Granderson is only starting because of Mets cheapness (08/2014): There is a track record that is much better than Curtis Granderson has shown in his first year in Queens throughout which he has become another example of a Mets’...

Curtis Granderson, bullpen help Mets beat Padres, 3-1 (06/2014): The Mets have won only three of their last 12 games, but they were fortunate enough to be matched up against a team playing even worse. San Diego has lost six of its last seven and 10 of its last 13, and has been held to one or zero runs a major-league high 21 times in 2014.

Curtis Granderson has ugly Mets debut (03/2014): Curtis Granderson did his best Jason Bay impersonation in his first game with the Mets. Granderson went 0-for-5 with three strikeouts — a very Bay-like performance. It’s only one game,...

Curtis Granderson simply not a realistic option for Tigers in left field (11/2013): The Tigers aren't interested. Not when they would part with their first-round pick in 2014 as part of the penalty (including a nice, fat contract) for signing a player who these days is more average than above average.

Curtis Granderson injury: Yankees OF to return Friday (07/2013): Granderson has been on the disabled list since May 24, when he suffered a broken pinkie finger. Prior to that injury, Granderson had played in just eight games, collecting seven hits, including one home run, over 31 plate appearance.

Curtis Granderson injury: Yankees OF has yet to swing bat (06/2013): Granderson, 32, has been able to play catch and do some defensive work. However, the fact that Granderson has not been able to hit yet is beginning to put doubt in the Yankees minds that he will return within the expected 60 days.

Yankees’ Curtis Granderson breaks arm, out until early May (02/2013): Curtis Granderson jogged to first base after being hit on his right forearm as if it was a minor annoyance. Back at the ballpark in a brace a couple of hours later, it was clear the New York Yankees had a pretty big power problem on their hands.

Despite Dreadful Postseason Slump, Cashman Still Believes In Curtis Granderson (10/2012): “To get 43 home runs from a center fielder isn't easy,” general manager Brian Cashman said. "And I don’t think one series erases that.”

D'Alessandro: The mystifying case of the Yankees' Curtis Granderson (09/2012): Center fielder has 35 home runs on the season, but is batting just .235

Child champs in Summer Reading Program meet Curtis Granderson (08/2012): It was a classic New York moment for 7-year-old Michael Pineda: meeting Curtis Granderson at Yankee Stadium. Though Michael was wearing a jersey bearing the slugger’s name, they weren’t there to talk baseball, but books.

Yankees' Curtis Granderson goes deep again, but insists his timing is off (04/2012): Says he's missing the pitches he wants to hit

NEW YORK -- Centre fielder Curtis Granderson raising his glove, hoping to convin (03/2012): Those tricky calls aren't being farmed out to technology quite yet. Major League Baseball says expanded replay is out for this year, with the goal now to put the extra looks in play for 2013.

Curtis Granderson a 'hit' with fans at book signing (12/2011): TENAFLY - New York Yankees centerfielder signed copies of his book, 'Be All You Can Be' at Womrath's book store.

Curtis Granderson (11/2011): All-Star center-fielder Curtis Granderson put down the bat and picked up a pen. While he'll be back on the field next baseball season, the New York Yankees standout player is currently promoting his new children's book.

Curtis Granderson Saved the Yankees’ Season, and AJ Burnett Did the Rest (10/2011): The Yankees are alive, and Bud Selig is a happy man.

With Curtis Granderson at center stage, Yankees-Red Sox series has MVP subplot (08/2011): BOSTON - From the days of Ted Williams and Joe DiMaggio, comparisons between Red Sox and Yankees players have been an enduring subplot to the rivalry itself.

Amid sweltering temperatures, Curtis Granderson tries No. 3 slot in Yankees' lin (07/2011): Both Rafael Soriano and Eric Chavez could be back this homestand

CHICAGO -- Curtis Granderson hit a tiebreaking sacrifice fly in the sixth inning (06/2011): Granderson, who was born in nearby Blue Island, also had two hits and a walk as the Yankees won for the seventh time in nine games, bouncing back from a 3-1 loss in the opener of their first series at Wrigley Field in eight years.

Serby's holiday Q & A with... Curtis Granderson (05/2011): The Post’s Steve Serby talked with the 30-year-old Yankees center fielder about his homer-heavy start to the season, adjusting to New York and much more. Q: How badly do you crave your first World Series ring? A: After I got there in ‘06 [with the Tigers], I thought I...

Yankees' Curtis Granderson hardly a villain, even after beating Tigers on openin (03/2011): Granderson says time is starting to allow him to look differently at playing against the Tigers, for whom he reached the World Series and All-Star Game.

Curtis Granderson goes with the flow (01/2011): Curtis Granderson is bound for New Zealand today, making his fourth trip abroad as a Major League Baseball ambassador. The next place on the outfielder's travelogue is Tampa, Fla., and his second Yankees spring training.