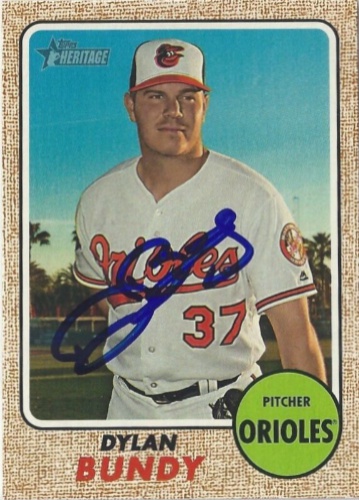 Current items with a signature of Dylan Bundy

These are the most current items with a signature of Dylan Bundy that were listed on eBay and on other online stores - click here for more items.

Traded items with a signature of Dylan Bundy

The most expensive item with a signature of Dylan Bundy (2011 Bowman Sterling Dylan Bundy Autographed Gold Refractor #'d 32/50 - GEM MINT) was sold in April 2013 for $290.01 while the cheapest item (Dylan Bundy Single Signed Baseball Autographed AUTO Baltimore Orioles.) found a new owner for $0.01 in March 2019. The month with the most items sold (23) was July 2012 with an average selling price of $45.00 for an autographed item of Dylan Bundy. Sold items reached their highest average selling price in April 2019 with $102.50 and the month that saw the lowest prices with $0.01 was March 2019. In average, an autographed item from Dylan Bundy is worth $20.50.

Most recently, these items with a signature of Dylan Bundy were sold on eBay - click here for more items.

Prospect Watch: How Orioles rookie Kyle Bradish has taken step forward for surpr (09/09/22): Bradish, acquired originally in exchange for Dylan Bundy, has changed his mechanics and his pitch mix

Twins start rotation rebuild, sign Dylan Bundy to $5M deal (12/02/21): Dylan Bundy is on his way to Minnesota after the Twins signed the right-hander to 1-year deal worth $5 million.

LOOK: Angels' Dylan Bundy throws up on mound during start due to heat exhaustion (06/29/21): At the time of first pitch, the temperature was 90 degrees in the Bronx

MLB hot stove: Angels acquire right-hander Dylan Bundy in trade with Orioles (12/2019): A package of pitching prospects goes back to Baltimore as part of the deal

Finally on normal schedule, Orioles prospect Dylan Bundy stays patient (01/2015): The Orioles still have big plans for top pitching prospect Dylan Bundy. The 22-year-old right-hander will arrive at spring training next month nearly 20 months removed from ligament reconstruction surgery on his throwing elbow. He's graduated from the rehab phase of his career to the...

Dylan Bundy placed on DL in minors with lat strain, could be done for year (08/2014): The Orioles already weren't expecting Dylan Bundy to contribute at the major league level this season, but now the focus may officially shift to 2015.

Dylan Bundy is struggling in his comeback from Tommy John surgery (07/2014): Orioles prospect Dylan Bundy would probably already be in the majors to stay if not for blowing out his elbow last season, but now the former No. 1 pitching prospect in baseball is struggling while rehabbing in the minors.

MLB trade rumors: Dylan Bundy potentially available (07/2013): The 20-year old is still considered one of the best pitching prospects in baseball despite undergoing Tommy John surgery one month ago. John Sickels of Minor League Ball rated Bundy as the No. 21 prospect in baseball in his mid-season update, writing:

No additional damage found during surgery on Dylan Bundy's elbow (06/2013): Orioles pitching prospect Dylan Bundy did not have any other damage in his right elbow besides the ligament tear that needed to be replaced, according to his agent. Bundy underwent Tommy John surgery on Thursday.

Orioles pitching prospect Dylan Bundy has injection, no surgery (04/2013): Dylan Bundy underwent an injection of platelet-rich plasma in his sore right forearm/elbow area on Monday and will not do baseball activities for at least six weeks.

Dylan Bundy ranked the No. 2 prospect in Baseball America's top 100 (02/2013): Kevin Gausman is the only other Oriole on the list at No. 26 Baseball America released its Top 100 prospects list Tuesday, and Orioles right-hander Dylan Bundy comes in at No. 2.