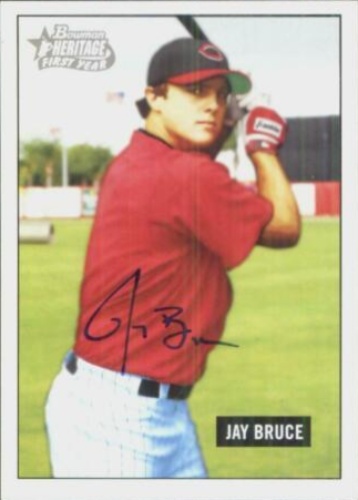 Current items with a signature of Jay Bruce

These are the most current items with a signature of Jay Bruce that were listed on eBay and on other online stores - click here for more items.

Traded items with a signature of Jay Bruce

The most expensive item with a signature of Jay Bruce (Beatles On Vee-Jay Bruce Spizer Hardcover book. Autograph By Author.) was sold in November 2021 for $650.00 while the cheapest item (Jay Bruce REDS ROOKIE Signed Baseball Card) found a new owner for $0.49 in October 2010. The month with the most items sold (271) was June 2008 with an average selling price of $40.00 for an autographed item of Jay Bruce. Sold items reached their highest average selling price in November 2015 with $76.48 and the month that saw the lowest prices with $1.99 was March 2015. In average, an autographed item from Jay Bruce is worth $20.53.

Most recently, these items with a signature of Jay Bruce were sold on eBay - click here for more items.

Yankees' Bruce to retire following Sunday's game (04/18/21): Slugger Jay Bruce is retiring after 14 seasons in the majors. Bruce, 34, remains active Sunday, but he intends to retire after the Yankees' game against the Rays.

Slugger Bruce, Yankees reach minor league deal (02/13/21): Veteran Jay Bruce, who hit .198 with six home runs and 14 RBIs for the Phillies last season, has reached a minor league deal with the Yankees and will try to win an outfield job at spring training.

Bruce, Quinn put on IL, leaving Phils thin in OF (09/06/20): The Phillies put outfielders Jay Bruce and Roman Quinn on the injured list Sunday, leaving the roster in a bind ahead of a busy upcoming stretch.

WATCH: Jay Bruce fires back at Mat Latos (02/2015): Watch Jay Bruce talk with 9 On Your Side Sports Director John Popovich.

Jay Bruce's bat outweighs defensive lapse at first as Reds down Cubs (07/2014): Jay Bruce played first base for the first time since high school and committed an error that let in a run Monday night but later homered to help the Cincinnati Reds rally for a 9-3 victory over the Chicago Cubs in the opener of a five-game series.

Video: Jay Bruce discusses Reds’ rout of Cardinals (08/2013): Reds outfielder Jay Bruce talks about the importance of scoring early against St. Louis, as the Reds did in Wednesday’s 10-0 win against the Cardinals:

Jay Bruce: I want to be the best hitter in baseball (02/2013): Photographer: WCPO Copyright 2013 Scripps Media, Inc. All rights reserved. This material may not be published, broadcast, rewritten, or redistributed.

Jay Bruce has potential to carry Reds far (10/2012): Jay Bruce has both the capability and track record to be hot or cold for the entire length of the postseason, even if the Reds were to go to as far as the World Series. Bruce is rarely anything in between, so he figures to be one or the other.

All-Star Jay Bruce gives the Giants a walkoff win (07/2012): Jay Bruce must have forgotten he was playing in San Francisco. Thinking there was a wall where there was no wall, he gave Angel Pagan a game-winning double as the Giants beat the Reds 4-3 on Sunday. There were two outs in a tie game in the bottom of the ninth when Pagan hit a…

NEW YORK -- Jay Bruce thought he sailed around the bases without much trouble at (06/2012): Bruce hit an inside-the-park homer that left Jason Bay with yet another injury and the Cincinnati Reds beat the New York Mets 7-3 on Friday night to give Bronson Arroyo his first victory in 5 1/2 weeks.

Jay Bruce, Todd Frazier pace Cincinnati Reds rout of Pittsburgh Pirates (05/2012): PITTSBURGH -- If the whole baseball thing doesn't work out for Todd Frazier, he might have discovered a second career as an emergency medical technician. Or maybe a lifeguard.

Reds Relying On Jay Bruce’s Big Bat Once Again To Bolster Offense (03/2012): On the whole, Jay Bruce has accomplished a lot already in his career, but there is still room for him to grow.

Jay Bruce's homer sends Reds to victory (05/2011): CHICAGO - Jay Bruce hit a three-run homer, Brandon Phillips made some key defensive plays at second base and the...