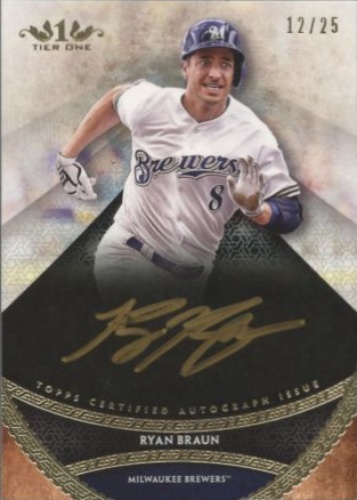 Ryan Joseph Braun (born November 17, 1983) is an American former professional baseball left fielder who played his entire career for the Milwaukee Brewers of Major League Baseball (MLB) from 2007 to 2020. Braun also played right field and first base during his career, and was a third baseman during his rookie season. More about Ryan Braun

Current items with a signature of Ryan Braun

These are the most current items with a signature of Ryan Braun that were listed on eBay and on other online stores - click here for more items.

Traded items with a signature of Ryan Braun

If you're interested in Ryan Braun Rookie cards you might want to take a look at our sister site that specializes in Baseball Rookie Cards only.

The most expensive item with a signature of Ryan Braun (RYAN BRAUN SIGNED GAME WORN JERSEY AND MORE) was sold in February 2010 for $2800.00 while the cheapest item (Ryan Braun Auto Signed Milwaukee Brewer All Star ROY) found a new owner for $0.86 in June 2010. The month with the most items sold (47) was May 2010 with an average selling price of $34.99 for an autographed item of Ryan Braun. Sold items reached their highest average selling price in July 2018 with $300.00 and the month that saw the lowest prices with $5.04 was August 2019. In average, an autographed item from Ryan Braun is worth $37.00.

Most recently, these items with a signature of Ryan Braun were sold on eBay - click here for more items.

Retiring OF Braun says emotions 'very mixed' (09/27/21): Ryan Braun threw out the ceremonial first pitch before the Brewers' game Sunday as part of his farewell, a 30-minute celebration of a 14-year major league career.

Ex-Brewers star Ryan Braun 'strongly leaning' toward retirement (03/16/21): The former MVP and Rookie of the Year has spent all of his 14 years with the Brewers

Braun: Retirement likely but decision not reached (03/16/21): Ryan Braun said Monday he hasn't picked up a bat since the end of the 2020 season and is "strongly leaning in the direction of being done as an active player."

Ryan Braun to sit out another day (04/2015): An off day tomorrow gives Braun three days off.

Should Ryan Braun and Aramis Ramirez continue to hit 3-4 in the Brewers’ lineup? (03/2015): Today's Paper, also known as the e-Edition, is an online replica of the printed newspaper. You can view today's paper or previous issues. Not a Subscriber?

'Important year' for healthy Ryan Braun (02/2015): Ryan Braun can't pinpoint the exact date, but he can remember with some clarity when his right thumb began bothering him.

Ryan Braun swings bat for first time since thumb procedure (10/2014): Braun struggled through the injury this season, finishing with a career-low .777 OPS.

Rockies lose to Brewers after Ryan Braun's game-winning single (06/2014): After Josh Rutledge tied the game at 2-2 with a solo homer in the top of the ninth inning, the Brewers walked off with a 3-2 victory on a single by Ryan Braun that scored Mark Reynolds.

Ryan Braun diagnosed with strained oblique (04/2014): Ryan Braun is out of the lineup for the second straight day Monday and will likely miss a few more games at the very least.

Milwaukee Brewers: Ryan Braun homers in first at-bat (02/2014): PHOENIX -- If Ryan Braun took any special sense of satisfaction in homering on the second pitch he saw in the Milwaukee Brewers' Cactus League opener Thursday, he certainly didn't let on.

Milwaukee Brewers: Ryan Braun getting used to the scrutiny (01/2014): Making his first real public appearance Sunday since the PED bust, Ryan Braun received a standing ovation as he made his way to the Hollywood Squares prop that was part of the entertainment portion of the Milwaukee Brewers' On Deck event.

Ryan Braun's fall bested them all (12/2013): Ryan Braun‘s acceptance of a 65-game suspension for PED use highlights an active 2013 year in the Wisconsin sports landscape.

Ryan Braun Taken Off Cover Of Jewish Sports Stars Book (09/2013): Worse than losing $3.4 million in salary, worse than having his name taken off a chain of sports bars , worse than the besmirching of his Affliction-lite clothing brand , Ryan Braun has lost the cover of a kids' book about Jewish athletes. Read more...

News quiz: Lions training camp, Ryan Braun and more (08/2013): Test your knowledge of current sports events of the past week:

Ryan Braun injury: Brewers OF will swing bat Tuesday (06/2013): Braun's injuries have taken a particular toll on his power numbers. He hit just two home runs over his last 39 games, and did not have a single long ball over his last 16 games, when the thumb injury really developed.

Ryan Braun voices support for Collins (04/2013): Jason Collins came out, got widely congratulated for his courage, and the games went on.

Milwaukee Brewers: Ryan Braun relishing a calm offseason (01/2013): A year ago, Ryan Braun was in limbo.

Ryan Braun has 1st career 3-homer game, at Petco Park, no less, as Brewers beat (04/2012): Milwaukee Brewers' Ryan Braun folows the flight of his third consecutive home run against the San Diego Padres during the seventh inning of a baseball game Monday, April 30, 2012 in San Diego.

Ryan Braun Prefers Not to Discuss Beating a Drug Suspension by Talking About Bea (03/2012): The Brewers star continues to be vaguely chatty.

Ryan Braun drug test sample collector fires back: Who is the real victim? (02/2012): “We won because the truth is on my side. The truth is always relevant and at the end of the day, the truth prevailed. I am the victim of a process that completely broke down and failed in the way it was applied in this case.” Read full article >>

Dan Patrick: Ryan Braun May Be Exonerated (01/2012): Dan Patrick cited a source on his radio show today that indicated embattled Milwaukee Brewers outfielder Ryan Braun may be found innocent in his drug suspension appeal, according to the Milwaukee Journal Sentinel.

MILWAUKEE -- Ryan Braun thought he'd homered to give the Brewers a lead. Instead (08/2011): Braun ended up scoring on his double that plated three runs after Darwin Barney made his second error of the inning, rallying the Brewers to a 5-2 victory over the Chicago Cubs on Friday night for their 25th win in the last 30 games.