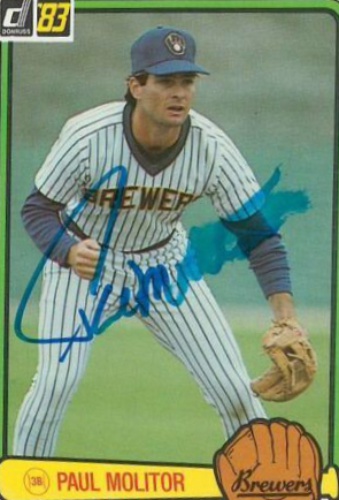 Paul Leo Molitor (born August 22, 1956), nicknamed "Molly" and "the Ignitor", is an American former Major League Baseball (MLB) player and former manager of the Minnesota Twins, who is in the Baseball Hall of Fame. During his 21-year baseball career, he played for the Milwaukee Brewers (1978–1992), Toronto Blue Jays (1993–1995), and Minnesota Twins (1996–1998). He was known for his exceptional hitting and speed. He made seven All-Star Game appearances, and was the World Series MVP in 1993. Molitor currently ranks tenth on the all-time MLB career hits list with 3,319. He is one of only five players in history with 3,000+ hits, a lifetime .300+ batting average and 500+ career stolen bases. More about Paul Molitor

Current items with a signature of Paul Molitor

These are the most current items with a signature of Paul Molitor that were listed on eBay and on other online stores - click here for more items.

Traded items with a signature of Paul Molitor

If you're interested in Paul Molitor Rookie cards you might want to take a look at our sister site that specializes in Baseball Rookie Cards only.

The most expensive item with a signature of Paul Molitor (1986 Paul Molitor autographed Milwaukee Brewers professional model roa... Lot 69) was sold in July 2016 for $4000.00 while the cheapest item (PAUL MOLITOR Signed 1993 WORLD SERIES Official PROGRAM Auto BLUE JAYS v Phillies) found a new owner for $0.01 in October 2017. The month with the most items sold (53) was July 2021 with an average selling price of $26.00 for an autographed item of Paul Molitor. Sold items reached their highest average selling price in July 2018 with $249.99 and the month that saw the lowest prices with $8.13 was September 2012. In average, an autographed item from Paul Molitor is worth $29.99.

Most recently, these items with a signature of Paul Molitor were sold on eBay - click here for more items.

Paul Molitor gets first managerial victory, beer dousing (04/10/15): CHICAGO -- Walking up the steps Friday afternoon, from the dugout back to the visitors' clubhouse after his first victory as a big-league manager, Paul Molitor had no idea what was waiting for him.

Paul Molitor taking on Cubs-like challenge with the Twins (04/09/15): When Paul Molitor wanted to get an idea of what to expect in his first year of managing, he called on former Brewers teammate Dale Sveum for some advice.

Paul Molitor's throwback jersey is big seller ... in West Virginia (03/25/15): Paul Molitor's hall of fame career has earned him a legion of fans across Minnesota, Wisconsin and Toronto. But a new survey finds he has a pocket of fans in the mountains of West Virginia.

Twins: Alex Meyer won't be in bullpen, Paul Molitor predicts (03/2015): JUPITER, Fla. -- If not for shoulder fatigue that chased Alex Meyer from his final start of 2014, the talented Twins right-hander would have made his big-league debut last September out of the bullpen.

Web Extra: Terry Ryan & Paul Molitor 1-on-1 at Twins Caravan (01/2015): The Twins wrapped up the first week of their annual Winter Caravan around the state with a stop in Red Wing. 5 EYEWITNESS NEWS was there to chat with GM Terry Ryan and new manager Paul Molitor...

Twins: Ex-reliever Carl Willis interviewed to be Paul Molitor's pitching coach (11/2014): The Twins could soon reach back to their championship past for their next big-league pitching coach.

It looks either Paul Molitor or Torey Lovullo will be the Twins’ new manager (10/2014): Not surprisingly former Rays manager Joe Maddon is a non-factor in the Twins' search to replace Ron Gardenhire.

Twins' Paul Molitor remembers Tony Gwynn as video analysis innovator (06/2014): BOSTON -- For Paul Molitor, Tony Gwynn's greatness couldn't simply be defined by what he did between the lines.

Paul Molitor is working his magic in Minnesota (05/2014): For years tons of Minnesotans wanted Hall of Famer (and local boy) Paul Molitor added to the Twins' coaching staff because he's always been touted as a great baseball mind and specifically an excellent base-running teacher.

HBT Daily: Will the oft-injured Bryce Harper be Pete Reiser? Eric Davis? Paul Mo (04/2014): Not that those are the only options, of course. But it's a three minute video. Cut us some slack here.

TFD: Hall of Famer Paul Molitor doesn't think A-Rod belongs in Hall (01/2014): The former Gophers and Twins star voiced his opinion at a banquet in Ontario this past weekend.

Paul Molitor to Appear at the "Duck Pond" on Wednesday, July 3rd (04/2013): Madison, WI - April 11, 2013. The Madison Mallards have announced they will host the inaugural Home Talent Classic game featuring Milwaukee Brewers Hall-of-Famer Paul Molitor on Wednesday July 3rd at 6:05 pm. Molitor will be available to fans for autographs from 4:00 to 6:30 pm.

Miguel Sano getting Hall of Fame help from Paul Molitor (03/2013): As the Twins groom Miguel Sano in the finer points of being a third baseman, they have enlisted the help of someone who knows a bit about that role – Paul Molitor .

Paul Molitor to players: Choose pleasure over pressure (08/2011): Baseball legend Paul Molitor told Little Leaguers - despite the pressure to perform - to take pleasure in the moments to be shared in the days ahea.

Paul Molitor Will Appear in Rapids This Summer (03/2011): Ex-Brewer and baseball hall of famer Paul Molitor will be on hand for the Northwoods League All-Star Game in Wisconsin Rapids this summer.

Hall Of Famer Paul Molitor To Speak In Beloit (12/2010): BELOIT, Wis. -- Baseball Hall of Fame player Paul Molitor will be the featured speaker at a southern Wisconsin event next month. He will appear at a banquet hosted by Beloit Snappers on Jan. 25.