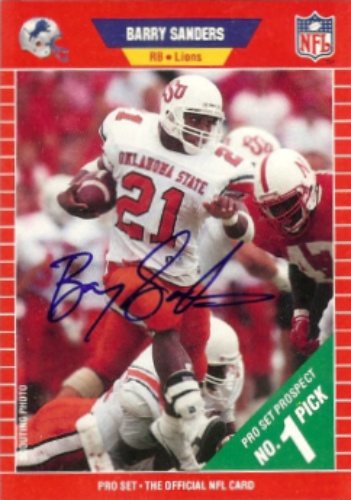 Barry David Sanders (born July 16, 1968) is a former professional American football player who was a running back in the National Football League (NFL), from 1989 to 1998 for the Detroit Lions. Sanders led the league in rushing yards four times and in rushing touchdowns once, establishing himself as one of the most elusive runners in the history of the NFL with his quickness and agility, despite being only 5 ft 8 in tall and weighing 203 lbs. Sanders played college football for the Oklahoma State Cowboys, where as a junior in 1988, he compiled what is widely considered among the greatest individual seasons in college football history, rushing for 2,628 yards and 37 touchdowns in 11 games. He was awarded the Heisman Trophy and was unanimously recognized as an All-American. More about Barry Sanders

Current items with a signature of Barry Sanders

These are the most current items with a signature of Barry Sanders that were listed on eBay and on other online stores - click here for more items.

Traded items with a signature of Barry Sanders

If you're interested in Barry Sanders Rookie cards you might want to take a look at our sister site that specializes in Football Rookie Cards only.

The most expensive item with a signature of Barry Sanders (BARRY SANDERS 2018 FLAWLESS SIGNATURE GEMS NFL SHIELD AUTO RUBIES DIAMONDS ? ?) was sold in August 2021 for $14998.20 while the cheapest item (BARRY SANDERS SIGNED FOOTBALL CARD) found a new owner for $0.01 in July 2008. The month with the most items sold (114) was September 2022 with an average selling price of $169.25 for an autographed item of Barry Sanders. Sold items reached their highest average selling price in September 2018 with $264.99 and the month that saw the lowest prices with $10.24 was June 2009. In average, an autographed item from Barry Sanders is worth $95.00.

Most recently, these items with a signature of Barry Sanders were sold on eBay - click here for more items.

Lions to honor Sanders with statue at Ford Field (10/30/22): An 8-foot bronze statue of Lions great Barry Sanders will be unveiled outside Ford Field ahead of the 2023 NFL season.

Lions to honor Barry Sanders with statue at Ford Field: Five amazing facts about (10/30/22): Sanders will be the first Lions player to be honored with a statue

Son of NFL legend Barry Sanders, Nicholas Sanders, joins Michigan State as a wal (08/26/22): Nicholas Sanders will wear No. 20 for the Spartans this season, the same jersey number his father donned for the Lions years ago

Lions icon Barry Sanders on hand to open restaurant in downtown Detroit (08/2022): Sanders was on site for the grand opening of Barry Sanders' Lefty's Cheesesteak, located just minutes away from Ford Field. The restaurant will commemorate his Pro Football Hall of Fame career.

Barry Sanders turns 54: Five fast facts on Hall of Fame running back's 54th birt (07/2022): Sanders was a treat to watch during his decade in Detroit

Ranking the best NFL draft picks of all time: Barry Sanders headlines the top fi (04/2022): With the 2022 NFL Draft almost here, let's look at the five best players in NFL history taken at No. 3 overall

Sanders to be honored in OK St.'s Ring of Honor (07/2021): Oklahoma State will induct Barry Sanders into its Ring of Honor on Nov. 13 and will also honor him with a statue outside Boone Pickens Stadium, the school announced.

Barry Sanders says Dan Campbell, new Detroit Lions regime 'feel different' (06/2021): Former Lions great Barry Sanders is excited about the new era his former team is entering and hopeful this group will be the one that breaks through.

Matthew Stafford seeks trade from Lions: NFL legend Barry Sanders reacts to news (01/2021): The Hall of Famer knows a little something about how Stafford feels

Dear Barry: Fan letters to Barry Sanders found nearly 20 years later (08/2020): Deep in a storage closet in the Lions' practice facility sat hundreds of fan letters from children of all ages addressed to one man -- Barry Sanders. After all these years, he finally gets to answer them.

Lions Franchise Five: Barry Sanders leads off the most influential faces in the (06/2020): Lions fans owe their franchise's rich history to these five men

Barry Sanders jokingly asks Garth Brooks to be his VP following Bernie Sanders j (02/2020): Barry Sanders is taking it all in stride

Detroit Lions should draft the quarterback who’s like Barry Sanders (02/2019): The Detroit Lions go largely ignored by the mainstream media. But a big move in the draft could change the fortunes of this forgotten franchise. The futili...

Lincoln Riley says Kyler Murray has a Barry Sanders-like ability to evade big hi (12/2018): Murray is coming off a Heisman Trophy-winning season and is expected to be a first-round pick

Detroit Lions great Barry Sanders among those still outraged by blown PI call ag (02/2015): Barry Sanders played in 153 games for the Detroit Lions. He played in 30 at Oklahoma State. He's watched countless others on TV. And he's never seen a bigger botched call.

Barry Sanders says Detroit Lions are close to making the Super Bowl (01/2015): Maybe the 50th time's the charm? The best player in franchise history says it's within reach.

Nike Designs Shoe For Barry Sanders [PHOTO] (07/2014): Former Oklahoma State Cowboy and Detroit Lion Barry Sanders is getting a new shoe just for him -- even after his playing career is over.

Barry Sanders hopes Caldwell's 'the guy,' team not that far away (01/2014): Barry Sanders wasn't in the camp of people calling for Jim Schwartz's head after the Lions finished 7-9, but the Hall of Fame running back understands why the decision to move on from Schwartz was made.

Michigan State's opponent: Stanford's Barry Sanders Jr. knows dad's moves (12/2013): Barry Sanders Jr. grew up in Oklahoma City, surrounded by Dallas Cowboys fans, but the Detroit Lions were in his heart - after all, his father is one of the Lions' all-time greats.

Barry Sanders sees talented Lions winning division (11/2013): Hall of Fame running back Barry Sanders said Sunday that the Detroit Lions had more talent than any of their NFC North rivals and were exactly where they should be: contending for the division title.

Gio Bernard Went Barry Sanders on the Dolphins For the Best NFL TD Run This Year (10/2013): Gio. Bernard. I counted four missed tackles, including two in the backfield for a loss. Once the rookie from North Carolina got loose on (...)

Madden NFL 25 Unlockable Players: Barry Sanders (08/2013): Over the next couple of weeks, we're going to be breaking down some of the most exciting unlockable players for the upcoming Madden NFL 25 . Up next is one of the most dynamic players ever to put on an NFL jersey: Barry Sanders.   All statistics from  Pro-Football-Reference . Begin Slideshow

Ex-Lions RB Barry Sanders back in Detroit after escaping harm in tornado (05/2013): Sanders was back in Metro Detroit after being in Oklahoma City for Monday's deadly storms. A massive tornado touched down in the suburb of Moore, killing two dozen people and injuring 200.

Ex-Lion Barry Sanders advances in 'Madden' cover contest (03/2013): Sanders has advanced to the third round of a contest to determine the cover of the "Madden NFL 25" videogame cover and will face former Baltimore Ravens linebacker Ray Lewis in the third round.

Barry Sanders likes what he sees in Lions' Leshoure (02/2013): The Lions will be scouring the draft looking for help at running back this off-season, but Hall-of-Famer Barry Sanders said he's a fan of one back already in town - Mikel Leshoure.

Stanford tailback Barry Sanders plays key role imitating top opponents, such as (12/2012): The redshirt player shows some of the same elusiveness that made his dad, the former NFL great, so special

Couple selling Barry Sanders card to raise money for child (10/2012): A Houston couple is selling a football card signed by Barry Sanders and Walter Payton in hopes of raising $20,000 to pay for in vitro fertilization.

Barry Sanders 'perfectly fine' with being No. 3 on NFL's all-time rushing list (08/2012): Just being in the conversation along with greats like Emmitt Smith and Walter Payton, who hold the top two spots, is good enough for the legendary Detroit Lions running back.

Lions haven't found another Barry Sanders, but current offense might not need on (07/2012): Sanders pressed his hands in wet cement Tuesday, to be enshrined forever at an exhibit outside the Detroit Historical Museum. He will forever be part of the Detroit sports community. But his curse continues.

NFL.com's Brandt: Barry Sanders is No. 2 RB of all time (06/2012): Here's another one of those debates that rages on and on: Who's the best NFL running back of all time? NFL.com's Gil Brandt has Barry Sanders at No. 2.

Stanford football: Why Barry Sanders chose not to attend same school as his famo (01/2012): The story goes that Barry Sanders was sold on playing football at Stanford when, during a recruiting visit, he walked the campus with star quarterback Andrew Luck.

B&C Morning Show: Craig Believes He Has Found A Friend In Barry Sanders (12/2011): Boomer & Craig were thrilled to take a call from Hall of Fame running back Barry Sanders Thursday morning.

Stanford Football Is Recruiting Barry Sanders (09/2011): Stanford may lose one superstar next year but another may come running in right behind him.

Barry Sanders, Jason Richardson maintain friendship that began with Detroit Lion (07/2011): FRANKENMUTH - Barry Sanders arrived quietly and left just as quickly, but his appearance was the talk of the golf course Wednesday at the eighth annual Jason Richardson Golf Classic at The Fortress.

Ex-Detroit Lions great Barry Sanders to make appearance at NFL draft (04/2011): Sanders among ex-players who will be announcing second-round picks.

Barry Sanders Jr. on playing for Texas: 'I've been telling people for a long tim (02/2011): Along with Oklahoma State, Alabama, Florida State and UCLA, the son of one of th greatest running backs of all-time has interest in playing collegiately at Texas.

Barry Sanders, Matt Biondi, and the Tiger Mom (01/2011): Amy Chua proclaimed that activities are only fun after getting good at them. An NFL player and an Olympic swimmer prove her wrong.