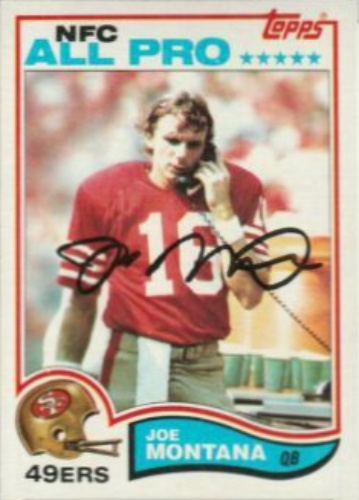 Joseph Clifford Montana Jr. (born June 11, 1956) is an American former football quarterback who played in the National Football League (NFL) for 16 seasons, primarily with the San Francisco 49ers. Nicknamed "Joe Cool" and "the Comeback Kid", Montana is widely regarded as one of the greatest quarterbacks of all time. After winning a national championship at Notre Dame, Montana began his NFL career in 1979 in San Francisco, where he played for the next 14 seasons. With the 49ers, Montana started and won four Super Bowls and was the first player to be named the Super Bowl Most Valuable Player (MVP) thrice. He also holds Super Bowl career records for most passes without an interception (122 in four games) and the all-time highest passer rating of 127.8. In 1993, Montana was traded to the Kansas City Chiefs, where he played for his last two seasons, and led the franchise to its first AFC Championship Game. He was inducted to the Pro Football Hall of Fame in 2000. More about Joe Montana

Current items with a signature of Joe Montana

These are the most current items with a signature of Joe Montana that were listed on eBay and on other online stores - click here for more items.

Traded items with a signature of Joe Montana

If you're interested in Joe Montana Rookie cards you might want to take a look at our sister site that specializes in Football Rookie Cards only.

Most recently, these items with a signature of Joe Montana were sold on eBay - click here for more items.

John McVay, architect of 49ers' dynasty and grandfather of Rams coach Sean McVay (11/01/22): One of McVay's first jobs with the Niners was finding a quarterback. Joe Montana ended up working out.

Five interesting Joe Montana nuggets to know on the 49ers legend's 66th birthday (06/11/22): From a 'Cradle of Quarterbacks' to a John Candy story, here are some Montana facts you may not know

Ranking the five greatest NFL QB controversies of all-time: Joe Montana vs. Stev (08/2021): A current position battle may one day join this list

Five interesting Joe Montana nuggets to know on 49ers legend's 65th birthday (06/2021): From a 'Cradle of Quarterbacks' to a John Candy story, here are some Montana facts you may not know

Montana, wife block kidnap attempt of grandchild (09/2020): Joe Montana told deputies that his grandchild was sleeping in a playpen on Saturday when an unknown woman entered their home in Malibu and grabbed the child. Montana's wife pried the child out of the woman's arms.

49ers legend Joe Montana explains why we'll see a 'fresher, different' Jimmy Gar (08/2020): Montana believes that a healthier, more experienced Garoppolo can build off of what he did in 2019

Five interesting Joe Montana nuggets to know on 49ers legend's 64th birthday (06/2020): From a 'Cradle of Quarterbacks' to a John Candy story, here are some Montana facts you may not know

Super Bowl 2020: Why the 49ers and Chiefs owe their offensive success to the Bil (01/2020): The legendary NFL architect has his fingerprints all over Super Bowl LIV

49ers eye 7-0 start, with streaking Panthers in way (10/2019): Joe Montana was throwing passes to Jerry Rice the last time the San Francisco 49ers were 7-0 to start a season. ''You get better or you get worse, you don't stay the same,'' 49ers coach Kyle Shanahan said. Sanders gives Jimmy Garoppolo an experienced veteran to throw to, and not

Florida State's Jimbo Fisher compares Jameis Winston to Joe Montana (02/2015): Fisher said opponents "do not want to give him the ball at the end of the game."

Joe Montana, Tom Brady’s idol, says Patriots QB was behind ball deflation (01/2015): This one, given the source of the accusation, has to sting.

Joe Montana has the perfect response to being reminded he didn't win the Heisman (12/2014): Five of them.

Joe Montana latest to weigh in on Jim Harbaugh, 49ers (11/2014): erry Rice may think Jim Harbaugh is gone after this season as 49ers coach, but Rice's former quarterback Joe Montana isn't so sure.

Joe Montana’s Son Spikes Ball To Kill Clock — On Fourth Down (10/2014): Nick Montana is the son of Hall of Fame quarterback Joe Montana, which is good...

Game Changer: Joe Montana Huddles with NBBJ on New Levi's Stadium Complex (08/2014): A massive new $400 million development is being planned less than the length of a football field away from Santa Clara's new Levi's Stadium, which is now officially open just in time for...

Joe Montana, 49ers legends blow out flame at Candlestick (07/2014): Niners legends like Joe Montana and Steve Young faced off vs. Dan Marino and other stars Saturday night in the Legends of Candlestick flag football game, but you'll never guess who scored the winning TD.

Next NFL Dynasty? Joe Montana Points at Seahawks (06/2014): Joe Montana knows something about dynasties, having won four Super Bowl rings. He thinks the NFL’s next dynasty may have just begun.

Joe Montana, Dan Marino to play in Candlestick finale (04/2014): Ready for a rematch? Joe Montana and Dan Marino will duel one last time -- in a flag football game -- in Candlestick Park's finale. It's not quite Super Bowl XIX, but perhaps Marino can get his revenge.

Huddling with Joe Montana On Leadership Team Success (03/2014): This coming Thursday I have a rare chance to huddle with Joe Montana, the legendary quarterback at the heart of a ten+ year stretch of high performance by the San Francisco 49’ers starting in 1981, including four Super Bowl victories. We’ll be sitting shoulder to shoulder at lunch.

Scout: Manziel like Joe Montana (12/2013): Johnny Manziel has yet to declare for the upcoming NFL Draft, much less play a down of pro football, but that isn't stopping one scout from proclaiming the Aggie quarterback could be the next Joe Montana.

Joe Montana expects Dolphins scandal to work itself out (11/2013): San Francisco 49ers great Joe Montana says bullying is common in the NFL and that the controversy involving Miami Dolphins players Jonathan Martin and Richie Incognito will work itself out

Joe Montana pitches hotel near new 49ers stadium (10/2013): Joe Montana is asking Santa Clara city officials to help him achieve his goal of building a new hotel and restaurants near the 49ers' new Silicon Valley stadium before the 2016 Super Bowl.

ACC Notebook: Joe Montana's son will test Syracuse (09/2013): Syracuse should probably work on its 71st-ranked NCAA pass defense this week, because a Montana is coming to the Carrier Dome. And he's improving every week.

Joe Montana alive and well despite false internet report of his death (08/2013): Former San Francisco 49ers quarterback was victim of an internet hoax that said he was killed in a car accident.

Why Joe Montana Wishes He Was 20 Years Younger (06/2013): The legendary QB Joe Montana chats about staying fit with arthritis and watching his sons follow in his footsteps.

SKECHERS and Joe Montana Team Up for Relaxed Fit® Footwear Commercial (10/2012): SKECHERS USA, Inc. , a global leader in lifestyle product and innovator of performance footwear, announced that the Company has reunited with Hall of Fame quarterback Joe Montana to shoot its second commercial for Relaxed Fit® from SKECHERS.

Joe Montana, Steve Young disagree on whether Tim Tebow has created Jets quarterb (03/2012): Former 49ers greats do agree that it's up to incumbent New York quarterback Mark Sanchez to avoid being replaced by Tebowmania

Neil Patrick Harris, Joe Montana suit up and take part in celeb beach bowl (02/2012): INDIANAPOLIS - Deion Sanders said he wasn't worried. Joe Montana went in with his game face on and Jordin Sparks just hoped sand did not end up in her eyes.

Joe Montana Chops Price of Napa Estate (01/2012): While 49er faithful are still wiping away tears from Sunday's loss, those die hard fans (well, at least those with $35 million to spare) can take solace in the fact that Joe Montana's luxurious Napa...

Joe Montana to Open Monday Night Football (12/2011): ESPN is already hyping Monday night's showdown between the San Francisco 49ers and the Pittsburgh Steelers as the biggest game on the network all season.

Daniel Brown: San Francisco 49ers great Joe Montana recalls painful comeback fro (09/2011): Joe Montana, famous for his fourth-quarter calm, encountered something that scared the daylights out of him in 1986: back surgery threatened to end his career at the peak of his powers.

Joe Montana discusses SF Giants, 49ers quarterback (08/2011): The following is an edited excerpt from an interview with Joe Montana by Brian Murphy and Paul McCaffrey on the KNBR morning show. Q: The Giants have been dealing with a lot of injuries this season. You must have had a...

Housing project backed by Joe Montana still alive for Hayward (07/2011): It might be scaled back from the ambitious plan originally approved for the area around the South Hayward BART station, but the transit-oriented development backed by football great Joe Montana is still very much alive.

Joe Montana to attend July 12 Santa Clara council meeting (06/2011): Montana is expected to personally present the pitch for a luxury hotel and entertainment complex on city-owned land adjacent to the planned 49ers stadium.

Legendary Quarterback Joe Montana Suffers Joint Pain (05/2011): At the peak of his career, Joe Montana was one of football's biggest names with several Super Bowl titles to his name. But now in his retirement, 'Joe Cool' is the face of a nutritional supplement that he says helps his aching joints -- the price of years of tackles.

Joe Montana's son to play football at UM (02/2011): Nate Montana, son of NFL great Joe Montana, has transferred from Notre Dame to the University of Montana. "He has enrolled and started classes today," said UM Athletic Director Jim O'Day. "(He) will be walking on to the football team."

NFL Playoffs: Tom Brady Is Not Joe Montana, But Someone Else Might Be (01/2011): Joe Montana never did it, not once, ever.