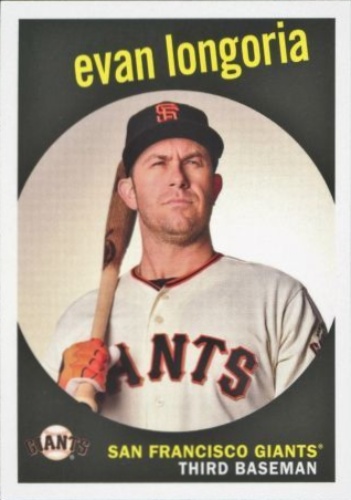 Evan Michael Longoria (born October 7, 1985), nicknamed "Longo", is an American professional baseball third baseman for the San Francisco Giants of Major League Baseball (MLB). He previously played in MLB for the Tampa Bay Rays from 2008 through 2017. More about Evan Longoria

Current items with a signature of Evan Longoria

These are the most current items with a signature of Evan Longoria that were listed on eBay and on other online stores - click here for more items.

Traded items with a signature of Evan Longoria

If you're interested in Evan Longoria Rookie cards you might want to take a look at our sister site that specializes in Baseball Rookie Cards only.

The most expensive item with a signature of Evan Longoria (Evan Longoria game used1st career Home Run gloves Homerun 1/1 signed auto) was sold in December 2015 for $3000.00 while the cheapest item (09 EVAN LONGORIA UPPER DECK SIGNATURE STARS #42) found a new owner for $0.10 in October 2010. The month with the most items sold (101) was October 2008 with an average selling price of $49.99 for an autographed item of Evan Longoria. Sold items reached their highest average selling price in September 2018 with $295.00 and the month that saw the lowest prices with $10.37 was November 2022. In average, an autographed item from Evan Longoria is worth $31.01.

Most recently, these items with a signature of Evan Longoria were sold on eBay - click here for more items.

Giants to be without Longoria after finger surgery (03/29/22): Giants 3B Evan Longoria will have surgery Tuesday and his finger is expected to be immobilized for at least 10 days.

Giants' Evan Longoria to undergo right index finger surgery (03/29/22): The Giants will be without their starting third baseman for the first few weeks of the 2022 season.

Giants 3B Longoria out 4-6 weeks after collision (06/2021): Giants third baseman Evan Longoria was placed on the 10-day injured list Sunday and will be sidelined four to six weeks with a sprained left shoulder.

A's Puk to IL; Giants to be without Belt, Longoria (07/2020): The Athletics' top left-handed prospect, A.J. Puk, was placed on the 10-day injured list because of a strained shoulder. The Giants, meanwhile, will be missing first baseman Brandon Belt and third baseman Evan Longoria on Opening Day.

Video: Evan Longoria excited by Rays' new look (02/2015): Team leader 3B Evan Longoria reported to Rays camp in Port Charlotte today and said he was excited by the new look of the team after the extensive change during the winter,

Evan Longoria leaves game in Japan with bruise after HBP (11/2014): UPDATE, 10:51: The Rays also confirm it was just a bruise for Longoria, that he he didn't require an X-ray and told MLB team manager John Farrell after the game that he was fine.

Evan Longoria's Historic Contract Will End Up Costing Him More Than $100 Million (05/2014): Evan Longoria of the Tampa Bay Rays is in what...

View From The Roof Produced An Incredible Bird's Eye View Of An Evan Longoria Ho (08/2013): Outside of the classic stadiums (e.g. Fenway Park, Wrigley Field), Tropicana Field is one of the oldest stadiums in Major League Baseball and has plenty of flaws.

This Explanation For Why Evan Longoria Isn't An All-Star Shows Why The Game Has (07/2013): Now that the All-Star rosters have been announced, American League manager Jim Leyland is having to explain why some deserving players were snubbed.

No. 10 Rays: Evan Longoria enters his prime as Tampa fidgets with financial hand (01/2013): Inside the Tampa Bay Rays' offices, they laugh. There is no better sort of humor than gallows to deal with the cruel reality that is the Rays.

Jaime Edmondson Announces She’s Pregnant and Tampa’s Evan Longoria Will be a Dad (12/2012): Miss January 2010 and the 3-time All-Star.

Evan Longoria’s return could be difference-maker for Rays (08/2012): It’s been 14 weeks — more than half a season — since Evan Longoria last played a major league game.

Rays unsure when Evan Longoria will return to lineup (07/2012): Tampa Bay Rays third baseman Evan Longoria was shut down after he felt discomfort in the hamstring during a minor league rehab assignment last month

ST. PETERSBURG, Fla. -- The streaking Tampa Bay Rays haven't missed a beat since (05/2012): With their star third baseman sidelined for up to two months with a tear in his hamstring, the AL East leaders completed a four-game sweep of the Seattle Mariners on Thursday and own the best record in the major leagues at 18-8.

Evan Longoria and His Playmate Girlfriend, Jaime Edmondson, Attended a “Hallowee (04/2012): But of course.

Evan Longoria is Not the Only Tampa Ray Dating a Playboy Playmate: Reid Brignac (02/2012): The wives/girlfriends box at the Trop is going to be jumping this summer.

Evan Longoria, We Know What You’re Up To Bro (09/2011): The old secret courtship Twitter pal act. It's the oldest trick in the book.

Bare-handed Evan Longoria breaks out (06/2011): I didn’t mention this in the recaps this morning because I was too busy being clever about a 14-10 final score, but Evan Longoria had a huge game yesterday, going 4 for 6 with two homers and five RBI. He had a huge weekend, in fact, getting eight hits, three homers and 10 RBI against the…

Evan Longoria, David Price have the talent and attitude to be the faces of the f (03/2011): Evan Longoria and David Price share an admiration for each other’s attitude and work ethic, Longoria for Price’s enthusiasm and selflessness, Price for Longoria’s consistent high effort.